Why Does the Twelfth Doctor Look so Good in Eleven’s Old Clothes?

Maybe the problem is that Capaldi looks good in basically anything. 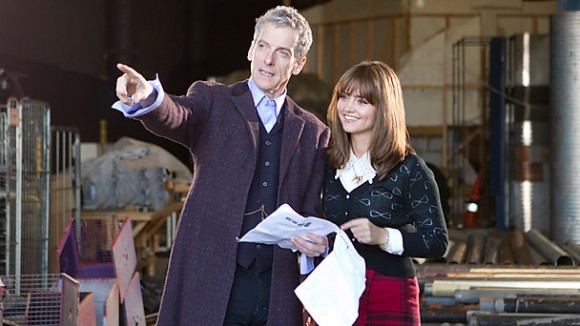 We’ve gotten a new glimpse of Peter Capaldi as the twelfth doctor, and while it first seemed that we were getting a look at him in his new outfit post-regeneration, upon closer inspection it turns out that it’s just his outfit from the end of The Time of The Doctor. But here’s the thing — why does he still fit in those clothes so well?

With previous regenerations in the new series, the change in body types was reflected pretty well on a visual level, most strikingly with the switch from the ninth doctor and the tenth. At 6’1″ and 6’0″ respectively, Tennant and Eccleston are about the same height, but Tennant still looked much baggier in Eccleston’s trenchcoat. This is understandable, given that Ten was, to put it in the words of one of his companions, “a long streak of nothing.” 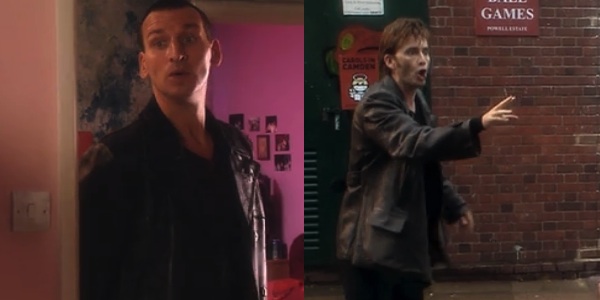 From “Rose” and “Christmas Invasion.”  Just look at how tiny his shoulders and arms are in comparison!

Eleven also appeared pretty disheveled in Ten’s clothes, but considered that he is also pretty long and streaky, it made sense that he wasn’t too overpowered in them. However, Tennant is 6’1″ and Matt Smith is 5’11”, so the pants should have been dragging more than they appear to in “The Eleventh Hour.” But overall, he definitely looks like these clothes don’t belong to him in the same way they belonged to Ten, particularly at “The End of Time Part 2,” when you can see just how well the suit jacket and shirt don’t fit. 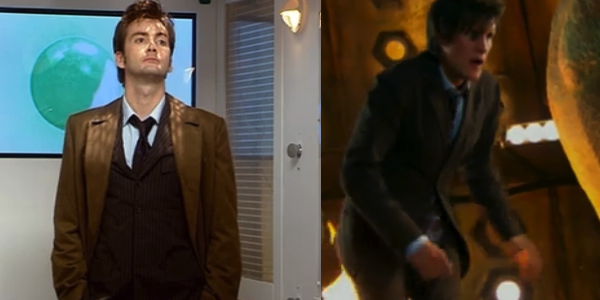 From “New Earth” and “The End of Time, Part 2.” Definitely too big for Tennant; look at the shoulders and neck.

Capaldi, however, looks pretty squared away in Smith’s jacket and vest. Admittedly the sheer amount of layers he’s wearing might be hiding any potential changes in sizing, and you could also make the argument that Capaldi and Smith aren’t of a dissimilar body type, either. But at 6’0″, Capaldi is actually taller than Smith, and definitely appears to have broader shoulders. Not that it’s hard to have broader shoulders than this: 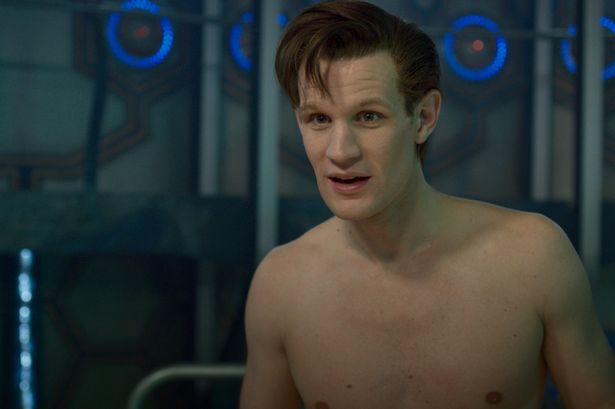 Sure, he’s got his shoulders back a bit here, but he’s not exactly barrel chested either.

So it’s no surprise that this newly released image is throwing some people for a loop — especially combined with the fact that Clara appears to have gotten a major bang trim and hair lightening, despite the fact that she’s wearing the exact same clothes from “The Time of The Doctor.” Oversight on the part of the design team? Or is this the outfit Twelve is definitely wearing? Or is it just that everyone looks good in an overcoat and a vest regardless of what size they are?

If any Geeko readers are particularly good cosplayers/tailors who know all the ins and outs of men’s sizing and can supply us with more information about this, then do let us know in the comments! In the meantime, we’re going to fantasize about what fantastic fun it would be if the thirteenth doctor were really short and had to swim around in Twelve’s outfit after regenerating.

(featured image via The Mary Sue, all images via BBC)