Could Tweet Seats In Theaters Be The New Smoking Section? | The Mary Sue

Could Tweet Seats In Theaters Be The New Smoking Section? 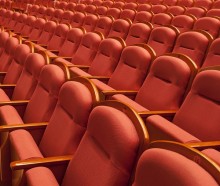 It’s become something of a mantra in the cinema and theater alike: Please turn off your cellphones before the performance begins. Depending on where you are, some of these warnings are a bit more lighthearted while others are a little more matter-of-fact, but either way it’s practically inevitable that whatever movie, musical, or play you are seeing, you’ll be asked to turn off your cellphone beforehand. Practically. A fad that bucks this trend is becoming more widely adopted. Commonly referred to as “tweet seats,” a phenomenon encouraging the use of cellphones during a performance is spreading, to mixed reviews.

The concept is simple. Much like restaurants with their increasingly rare smoking sections, some theaters are setting aside a section of seats where users can use their cellphones, ostensibly for tweeting, during a performance without disturbing less “connected patrons.” The idea has been around for a while. In 2009, the Lyric Opera in Kansas set aside 100 tweet seats during the final performance of Gilbert and Sullivan’s HMS Pinafore, and recently, tweet seats made the move to Broadway after being incorporated in the revival of the musical Godspell. The hope, it seems, is to try and get the younger generation more interested in the ancient art form that is live theater by allowing them to bring their vices with them. As a bonus, the performance the tweeters are watching is almost certain to get some free publicity.

In a way, it’s not entirely surprising. In addition to the “separate sections” bit, the smoking section analogy carries a few more parallels. Obviously, the light from cellphone usage can bother other non-using patrons a bit like smoke, but also, Twitter is decidedly one of the more addictive social networks out there, to the extent that urges to tweet may be harder to resist than urges to smoke. If people are going to be doing it anyway, you might as well just stick them in a corner and let them go at it, right? And from a publicity standpoint, the benefits of having your show tweeted about aren’t trivial, that is at least if your show is good. In fact, the largest number of tweets-per-second ever can be attributed to the televised screening of a film, during which viewers were all free to tweet about it, and tweet they did, at a rate of 25,088 tweets per second.

Of course, not everyone is going to be thrilled about this kind of thing. While tweet seats cause little damage to non-tweeters — unless there is a surplus of tweet seats and also a surplus non-tweeting patrons — something just seems a little bit off about it. Ars Technica’s Curt Hopkins takes issue on principle. “It is an operatically stupid idea,” he says in an article about the phenomenon, balking at general managers and marketing leads’ illusions that “social media is going to save theater.” If you’re just trying to fill seats, however, with minimal concerns about the integrity of an art form, tweet seats seem like a no-brainer.

Again, I find myself returning to what I think is the troubling apt analogy of the smoking section. Although tweeting doesn’t seem like a huge deal, the willingness of theaters to pull a 180 on their policy in order to hold the attention of increasingly connected youth is sort of troubling, both in the sense that they’d do it and in the sense that it might work. There’s an argument to be made that the inability not to tweet is a growing, potentially serious problem for many people. 97% of college students use their phones for social networking, 88% text in class, and 75% say their phones never leave their sides. There’s also evidence to suggest that social networking — among other things — is annihilating attention spans, not to mention the existence of things like Internet Addiction Prevention Clinics and Internet Addition Disorder. Could it be that tweet seats are a bid to accept, and even facilitate a growing, unhealthy social media dependency to make a few extra bucks? Maybe, maybe not. We’ll have to wait and see how things unfold to find out for sure.

In the meantime, I know I wouldn’t much mind some tweeters going crazy in the back of any production I go to see, as long as I don’t have to soak in the light pollution. And as long as there isn’t some jerk back there posting to Twitter with Siri.