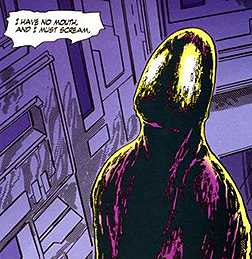 Up until a week ago, TV Tropes had a very handy trope index called Rape Tropes. (Note: all TVT rape trope pages in this article link, ironically, to Google caches.) This page also linked to other iterations of rape tropes in popular culture such as Rape as Backstory, Rape and Switch, Rape as Drama, Rape as Redemption, and other rape tropes common in the pop culture idiom.

Today when you access any of these pages, you’re informed, “We do not want a page on this topic. It does not meet our content policy.”

Recently on the discussion thread for combining the “Victim falls for Rapist” trope with the “Rape as Stockholm Syndrome” trope under the standard Rape Is Love cliche, Wiki owner and admin Fast Eddie explained that all tropes related to rape had been wiped off the site because it was getting the site “in trouble with Google.”

Apparently that meant any trope containing the word “rape” had to go.

But despite this frantic renaming/excision, either Google brought down the content policy hammer or the admins simply decided it wasn’t a battle worth fighting. When Fast Eddie noted the deletion of the trope page, he added, “There is no explanation needed beyond the fact that the topic is a pain in the ass to keep clean and it endangers the wiki’s revenues. We just won’t have articles about rape. Super easy. No big loss.”

Well. Except that tropes where characters, especially women, are forced or coerced into doing things without their consent are so numerous that TV Tropes hasn’t effectively gotten rid of them all, and probably couldn’t even if they tried. Similar tropes pop up all over the site, and clicking on a few reveals that the site is now a mish-mash of available content warring with the bahleeted presence of any trope that contained the unwanted word “rape.” So Fate Worse Than Death, And Now You Must Marry Me, Old Man Marrying a Child, and Droit du Signeur are still content-approved, but drastically varied tropes like Rape as Comedy, Mind Rape, and Rape, Pillage, and Burn are all gone for good.

So was Fast Eddie being sarcastic when he described the ousting of an enormous chunk of content as “no big loss”? It’s tough to tell, given what seems to be his blasé attitude about clearing out the contents of his archive to “keep the advertisers on board.” But surely Fast Eddie must be aware that TV Tropes isn’t just a repository of fan clichés and geek trivia. The categorization of tropes that hurt, marginalize, and perpetuate victims of rape and rape culture—particularly women—is incredibly important in a cultural moment where debate about sexist tropes is greater than it ever has been. It’s impossible to engage in intelligent debates about issues like sexism in video games or rape tropes in YA fantasy without having clear, accessible examples of what those harmful tropes look like. Two such examples of this kind of categorization and discussion are Anita Sarkeesian‘s Tropes Vs Women and Gail Simone‘s groundbreaking website Women in Refrigerators, both of which have helped proliferate awareness and discussion of typical tropes like “Rape is Love” and “Fridging.” These tropes are still to be found on the TV Tropes website, but now all the context of being linked to the word “rape” (hi, Google!) and rape culture is missing. Clicking on links around the “Stuffed into the Fridge” page now takes you to page after page of “We do not want a page on this topic,” rendering all but useless TV Tropes’ infamously vast interlinking of tropes and contextual understanding of how those tropes operate in our culture.

If you’re thinking this ineffectual censorship just highlights how ridiculous and dangerous the pressure to rid our social vocabularies of potentially “creepy” words like “rape” and, oh, “vagina“, have become, you’re not alone. Yesterday morning, Geek Feminism stepped in with a clever announcement: since TV Tropes’ content and the GF Wiki’s content are both licensed under the same Creative Commons license, the content can be relocated. So far only one trope, Rape as Backstory, has been relocated, but perhaps if GF users hurry they can revive all of the deleted TV Tropes pages.

It might be too much to ask for cooperation in their efforts from the TV tropes admins, who seem to have adopted an attitude of “DNW” to the whole issue; but given the many recent controversies over rape-related tropes in pop culture and attempts to silence discussion about them, it’s undeniable that losing an enormous amount of content that adds visceral context to an ongoing and important discussion would be a Kiss of Death to TV Tropes’ integrity as an archive—not to mention the ongoing battle between Google ads and free speech on the internet.

(Top pic from And I Must Scream.)