So We Replaced Sexy Lara Croft With Victim Lara Croft 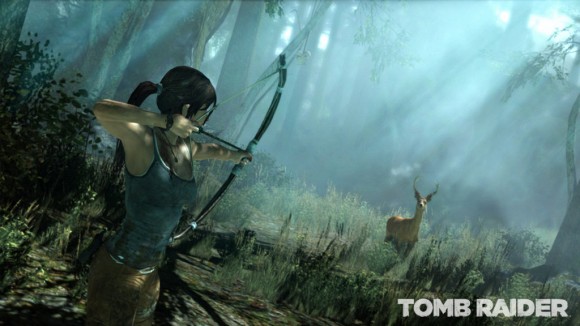 Update: Crystal Dynamics has responded to some of the concerns about the direction of Tomb Raider.

Ever since announcements of a new Tomb Raider game started to surface in 2010, diehard fans of the series have been anticipating a reboot of the franchise led by the strong, ass-kicking Lara Croft. “Forget everything you know about Tomb Raider, we are exploring things that have never been done before in this game,” said Darrell Gallagher, Head of Studio, Crystal Dynamics. There was a lot to wonder about the new Tomb Raider — given the success of Uncharted, a similarly styled but throughly modern action-adventure platformer, would the new iteration of Lara Croft’s adopt its gameplay and the badassery of lead character, Nathan Drake? However, after the official E3 preview trailer, it became quite clear that Lara Croft had been shifted from being a badass to being utterly victimized. “A big part of that journey is seeing some of the hits she’s taken along the way and why she had to get that inner strength and the inner core to become the woman that we all know. There is that sense of seeing it and being explicit about that. It’s part of the narrative,” Crystal Dynamics head Darrell Gallagher told to the Penny Arcade Report, suggesting that it is the violence and tragedy that Lara experiences, not her strength, that makes her admirable.

And so it wasn’t particularly surprising when, Ron Rosenberg, executive producer of Tomb Raider, has gone on record with Kotaku to state that players “will want to protect” Lara Croft as she is “turned into a cornered animal” in the face of extreme violence and the threat of rape. Gee, a woman protagonist facing sexualized violence, how original. Hit the jump for more from the article.

[Warning: the rest of this post will contain discussion of violence against women and rape].

In a recent interview with Kotaku, Rosenberg argues that Lara Croft has not yet become the badass adventurer we all know and love yet, and furthermore, being a female protagonist, gamers (men) don’t relate to her normally anyway, thus, she is a heroine to be protected instead of emulated or admired:

“When people play Lara, they don’t really project themselves into the character,” Rosenberg told me at E3 last week when I asked if it was difficult to develop for a female protagonist.

“She’s definitely the hero but— you’re kind of like her helper,” he said. “When you see her have to face these challenges, you start to root for her in a way that you might not root for a male character.”

This reasoning, of course, relies upon a few overused, incorrect, and frankly boring assumptions about women, namely that 1) Women must be protected because we cannot protect ourselves, 2) Men cannot ever relate to women (or women characters) in a meaningful way because we are fundamentally different and share no overlapping interests or experiences, and 3) Women do not play video games and thus have no need of a relatable woman protagonist to connect with (or, possibly, but just as erroneously, female players of the Tomb Raider games also do not project themselves into the character of Lara Croft).

Not only does this game seem hell-bent on invalidating women gamers and the idea that a female character has just as much capacity to be surprisingly competent as a male one, it also seems pretty eager to reproduce and normalize a culture in which women are blamed for being raped. As Kat Howard rightfully points out,

I have a huge problem with there being a game where, if your female character doesn’t fight back well enough, she gets punished by being raped. And my problem is because this hews too closely to the actual reactions rape survivors get. Here is what we get asked: What were you wearing? Did you know him? Did you scream? Was your skirt too short? Were you in a bad part of town? Did he spend a lot of money on dinner? Were you wearing a bra with that dress? Did you let him touch you? Did you hit him? Did you fight back? Did you fight back enough?

Lara Croft will be punished with rape for failing to complete the game objective of not getting raped. The responsibility is wholly upon her to protect herself, it is not upon the scumbag rapists who are trying to hurt her. According to the producers of Tomb Raider, it is certainly not the fault of a culture that encourages depictions of sexualized violence against women. “The ability to see her as a human is even more enticing to me than the more sexualized version of yesteryear,” Rosenburg states. This is a pretty telling observation — in his mind, what makes Lara Croft human is her vulnerability to rape and violence provided that she is not sexy (even though being voluptuous is not the end all be all of being considered sexy, in case he never got the memo). In other words, the only women that deserve compassion after being raped, the only women that could be considered human after being raped, are desexualized women who weren’t ‘asking for it.’ He is drawing a contrasting image between a “sexualized version” of her and a “human” version of her.

To make matters worse, the first thing Croft encounters in the trailer is another woman tied up in what looks like a sacrificial altar, suggesting that this development crew is relying upon characterizing her as a helpless white woman who must be guided by a male player through  the “savagery” of the island. Problematic indeed.

Personally, the worst part about this reboot is that it is taking a traditionally feminist character (who has been embraced as a empowering fantasy in spite of the canonical hypersexualization of her character), one of the most beloved ass-kicking female protagonists in gaming, and warping her and her story to cater to a male-dominated gaming culture (and culture at large). Instead of offering women gamers a game in which we can relate to the protagonist, share her hopes and despairs, we’re left with the promise of  veritable torture porn. The promise of a new Tomb Raider held so much potential to add to a growing selection of awesome women protagonists, especially for women gamers. Ron Rosenburg, I would like my strong women protagonists back, and I would like them without having to experience the threat of rape and rape culture, even in a game. I’ve had enough of that in real life as it is.