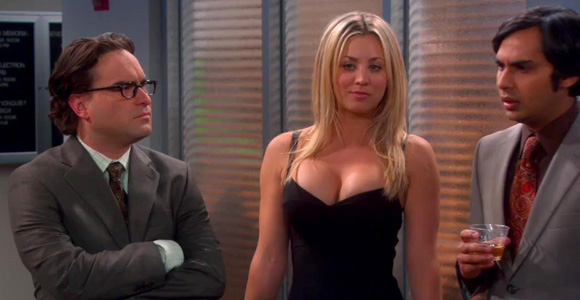 No, Penny from the Big Bang Theory is not a teenager but frankly, this illustrates the point rather well, don’t you think?

In what may be another “no, duh” moment for a lot of folks (Did you read this post on women and video games?), a new study suggests teenage girls are sexualized a great deal on broadcast network TV. The study was conducted by the Parents Television Council’s “4 Every Girl Campaign.” From their press release:

“Our study exposes a very real problem of teen girls being shown in sexually exploitative situations on TV, and that these situations are being presented as humorous. Sexually exploiting minors on TV – especially for laughs – is grotesquely irresponsible and must end,” said PTC President Tim Winter.

So when we write stories about rape references at events like E3, this is what we’re talking about. References, jokes, and exploitation of women so ingrained in our culture through entertainment, people think it’s acceptable behavior toward women.

Holly Smith, a survivor of child sex trafficking, made a statement in regards to the study’s findings. [Trigger warning] “By intermediate school, I was so sexualized that I was first sexually exploited at age 11; a high school boy forced a sexual act in the local skating rink. By age 12, I had been sexually assaulted by another boy in high school,” she wrote. “What’s most disturbing is that when these assaults occurred I had no idea that I had been assaulted. I thought these acts were part of teenage dating. I literally had no idea that saying no was an option; I never saw a girl say no on television and be respected for her decision.”

“The prevalence of images that trivialize sexual exploitation can be interpreted as sanctioning the sexualization of women. When these messages, images and ideologies are delivered via mass media, the definition of acceptable and unacceptable behaviors are communicated both implicitly and explicitly to viewers. Similarly, when the media associates humor with sexual exploitation they are sending a strong message that these issues are harmless and require neither urgency nor a strong response,” said Winter. “We hope that these disturbing findings will spur concern, increased dialogue, and a collective responsibility to find answers that will result in a qualitative difference in the lives of young girls and women everywhere.”

“Fox and ABC declined comment on the findings. NBC, CBS and CW did not immediately respond to requests for comment,” reported CBS News, adding, “The report’s release, intended for last year, was delayed by the PTC’s decision to focus its resources on the subject of violence in media after the Newtown, Conn., school shootings. Networks also weren’t heard from on that PTC study.”

You can read the full report here in PDF form.

rape jokestelevisionviolence against womenwomen in film