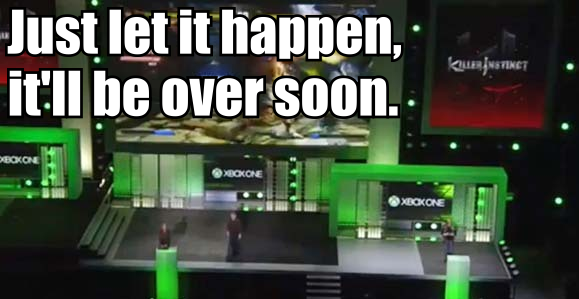 Microsoft has responded to accusations one of their game producers used a rape joke in a recent presentation at the Electronic Entertainment Expo.

Our sister site, The Jane Dough, posted about initial situation earlier this week. The presentation in question was for Killer Instinct on the Xbox which featured a producer and a manager playing the fighting game.

“Just let it happen, it’ll be over soon,” the producer said when it seemed like the manager, a woman, was losing. It was this exact statement that left many cringing. Why? Because while many would consider what the man said as simply trash talk, many others related it to rape. Even more so when you include the following lines from the encounter:

“You have a fight stick!” the manager said. “Wow, you like those,” the producer replied. “No, I don’t like this!” said the manager.

While many were angered by the words, many others came to their defense. But Gamers Against Bigotry wrote a pretty good post breaking down why, “Just let it happen, it’ll be over soon,” is trash talk, a rape reference, and highly problematic language all at the same time. They write:

It’s a rape joke because it is a phrase rapists use during rape and is reported later by survivors; it’s used commonly enough that a huge number of people heard him say that and immediately went “WTF” on Twitter, in their minds, and in their stomachs; and it’s a joke because people laughed (is it worth noting it was the only thing people really laughed at in that demo?).

It’s a rape joke that is a variation the many rape-related phrases and jokes that get used flippantly in games to describe a severe defeat. “You might as well try to enjoy it” or “don’t fight it” or “I wish you had at least used lube” or (the most common) “I/we just got raped.” Some of these are phrases perpetrators of rape use during the act and are later turned into jokes by us, while others are victim-centric and used as a self-deprecating joke to dismiss a bad loss — all of them condone and normalize rape, and they are all problematic.

The people who don’t consider the statement a rape reference most likely don’t realize it is simply because using it as a joke or trash talk has become too prevalent in our society. GAB writes:

Casual rape jokes are normalized far beyond just games culture. Back in the 90s, we (Texans) had a gubernatorial candidate Clayton Williams who was asked about rape and joked “if it’s inevitable, just relax and enjoy it.” Yes. That’s real life. Several years before that, Tex Antoine, a New York City weatherman (but originally from Texas… damnit) joked, while responding to a story about a 5-year old girl who was violently raped, “With rape so predominant in the news lately, it is well to remember the words of Confucius: ‘If rape is inevitable, lie back and enjoy it.’” Also real life.

The E3 segment was initually reported as scripted by Kotaku but has since been refuted by Microsoft. “The comments in question during the ‘Killer Instinct’ demo were not scripted,” they told CBS in a statement. The demo was meant to include friendly gameplay banter, and there was no ill intent.”

But the words “friendly gameplay banter” is something to think about. Not all gamers mind trash talk, or even trash talk that uses offensive language, but it’s worth noting there are many who do mind it, and there is a distinct gender divide when it comes to how that language is used .

Some, not all, gamers react poorly when their comfortably offensive territory is threatened, however. I’m sure you remember the treatment Feminist Frequency’s Anita Sarkeesian received (and continues to receive) when she decided to do a series on women in video games. But Microsoft previously said they take in-game harassment very seriously which is probably why Microsoft Studios corporate vice president Phil Spencer released this follow-up statement about the E3 incident:

“Yesterday, during the Xbox E3 briefing, one of our employees made an off the cuff and inappropriate comment while demoing ‘Killer Instinct’ with another employee. This comment was offensive and we apologize. At Microsoft, being open and respectful with others is central to our code of conduct and our values. Bullying and harassment of any kind is not condoned and is taken very seriously. We remain committed to make gaming fun for everyone, and in that effort, we must lead by example.”

What did you think of the incident and what are your thoughts on the apology?