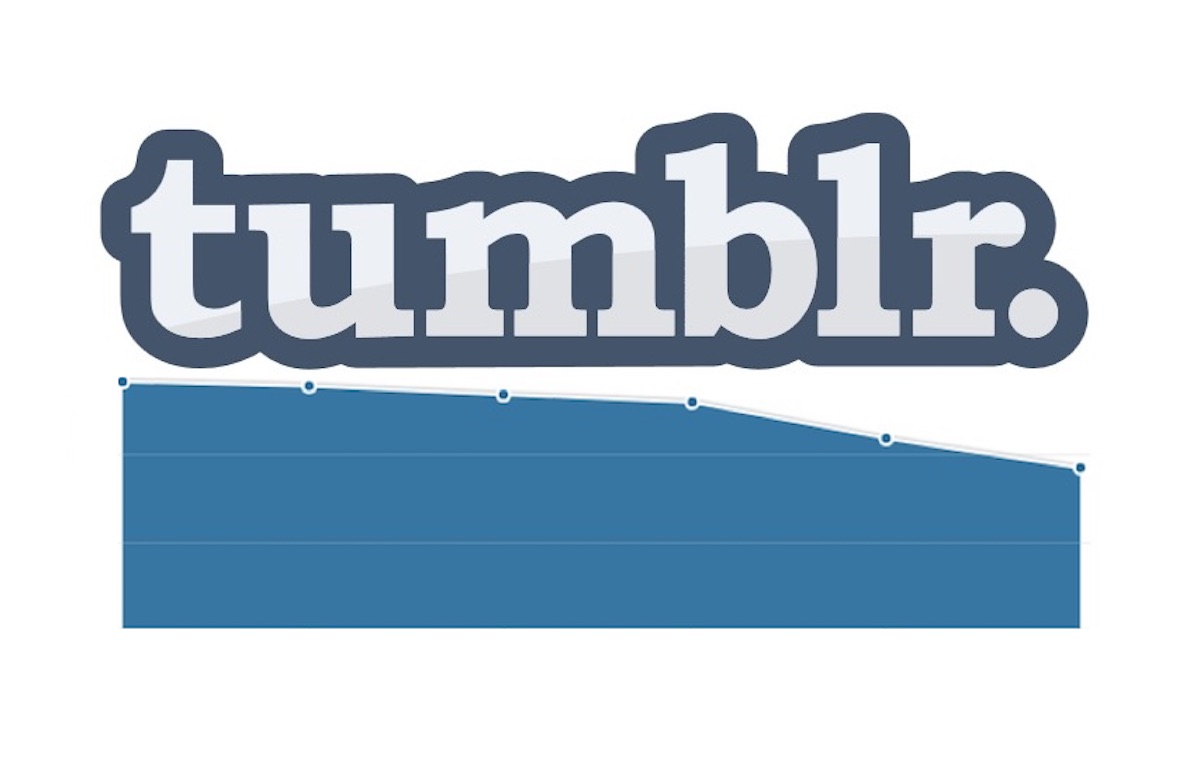 Let’s check in with Tumblr and see how the social blogging site is faring since it unceremoniously banned adult content in December.

For adult content enthusiasts, Tumblr was a place to let their freak flag fly. Like-minded individuals, including those from the LGBTQ community, found a place they belonged, bonding over a shared love of kink in carefully-curated communities. And now it’s gone.

After years of billing itself as the network for creators, where NSFW content was embraced, Tumblr’s abrupt reversal of policy and its poor handling of the roll-out (specifying that “female-presenting nipples” were no longer allowed to be on view is one for the history books) shook its userbase en masse.

I wrote about my own lessened use of Tumblr for fandom connectivity, the crickets that have taken up residence on my dashboard in lieu of fresh posts. Anecdotally, amongst my friends and The Mary Sue commentariat, experiences have tracked. There’s a noted slump in activity across fan-based communities, with some people decamping to NSFW-friendly platforms like Twitter and Reddit or back to older spaces like Dreamwidth and DeviantArt. Tumblr isn’t dead, but it has been significantly reduced from its pre-ban form.

Fandoms get a lot of attention and make noise on Tumblr, but they’re still a small fraction of users and visitors overall. And, of course, anecdotes are one thing, and numbers are another. I was curious as to how Tumblr as a whole was holding up. So let’s take a look at some of the cold hard traffic realities. A Hungarian Tumblr alternative keen to host your NSFW content, Plinner, put together a report that showed that Tumblr lost a staggering near-20% of its traffic in the first month after the NSFW ban’s implementation. 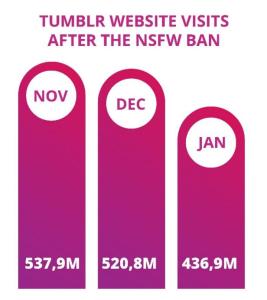 via Plinner, metrics from SimilarWeb

Since that precipitous plunge in January, Tumblr’s monthly visits have continued this downward trend. Metrics from the website analysis service SimilarWeb show that the fall in traffic was not a one-off in response to the ban’s implementation but an ongoing result.

A self-imposed loss of 30% and counting traffic-wise isn’t just shooting oneself in the foot, but the knee and maybe the thigh for good measure. For most services it would be viewed as a catastrophe in need of immediate remedy, yet Tumblr did this on purpose. The content ban decision continues to be mind-boggling to me, especially because it wasn’t necessary or called for by anyone except maybe Apple. Many of us suspected that the ban was a reactionary response to Tumblr being temporarily pulled from the App Store after child pornography was discovered. As TheNextWeb explains, this was indeed what happened, but the corrective lengths taken did not square with the issue at hand.

Rather than just ridding the site of its offensive content, however, Tumblr elected to blow the whole thing up and start over, this time as a PG-13 version of its former self. Like most online platforms, Tumblr has had its issues with unsavory content — but no more than YouTube, Facebook, Twitter, and any other place where humans congregate. The site wasn’t promoting child pornography, and it certainly didn’t approve. Its terms of service prohibited exploitative images of minors, and the team worked promptly to remove them once discovered.

I can confirm that this was the case, because I used to work on the Tumblr Trust & Safety team tasked with this effort amongst other sensitive content violations. My own experience increases my dismay at the content ban. I can’t help but feel that a scorched-earth measure like Tumblr’s doesn’t help to eliminate the distribution of child pornography—if anything, it drives those who generate and consume it even further underground, reducing the likelihood that they can be reported to the proper authorities and the content removed.

Additionally, I’m left to wonder how well the tech is even working in this respect. The NSFW ban features have been glitchy on Tumblr: spambots and graphically pornographic posts still spring up, while ridiculous things like bare-breasted works of classic art get flagged. Whether the issue of child pornography has been effectively addressed on Tumblr is a huge unanswered question.

Beyond what most of us would term flat-out pornography, it’s important to remember that Tumblr hosted a rich diversity of artists who dabbled in NSFW imagery, photographers with nude subjects, kink groups exploring their identities, and LGBTQ+ folks who felt they finally had a safe space to express themselves, sometimes with the inclusion of nipples without gender determination.

It seems to me that the crucial cultural offshoots of what constitutes “NSFW” were not factored in when the ban was proposed, nor the backlash from Tumblr’s largely politically engaged and outspoken userbase. If these factors weren’t considered, the error is egregious. If such concerns were considered and summarily dismissed, then Tumblr’s receiving exactly what it deserves as it dwindles from consequence.