In a Bad Move, Tumblr Bans All Adult Content | The Mary Sue

In a Catastrophically Bad Move, Tumblr Will Ban All Adult Content 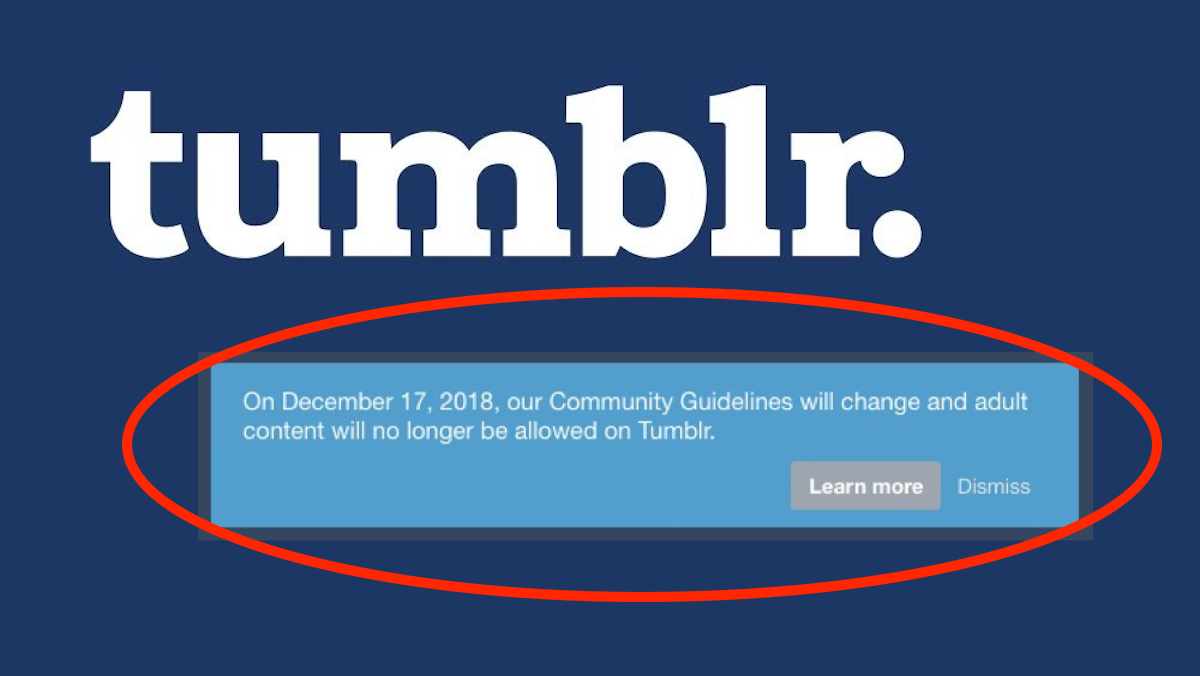 Tumblr has announced that on December 17th, the social blogging site will begin banning all adult content—with a few tame exceptions—from its network. This is an out-of-touch action from a service that will see it drive away countless users. Even worse, the ban will disproportionately harm marginalized creators.

The Verge has the full report on Tumblr’s adult content ban, which will go into effect on December 17th. “In a move that will eradicate porn-related communities on the platform and fundamentally alter how the service is used,” The Verge writes, Tumblr’s Safe Mode (an opt-in setting which filtered out content that was flagged NSFW) will be eliminated, as presumably post-ban, all posts will magically become safe.

Banned content includes photos, videos, and GIFs of human genitalia, female-presenting nipples, and any media involving sex acts, including illustrations. The exceptions include nude classical statues and political protests that feature nudity. The new guidelines exclude text, so erotica remains permitted. Illustrations and art that feature nudity are still okay — so long as sex acts aren’t depicted — and so are breast-feeding and after birth photos. [Emphasis mine]

Here’s the real story as I see it: Tumblr has long had a problem with child pornography on its platform, playing a perpetual game of whack-a-mole with removing the content. Recently, the issue entered the public sphere again when the app was booted from the iOS App Store while Tumblr worked to take down a recently-discovered cache of such material.

As a Tumblr-watcher, it seems clear to me that in an attempt to eradicate that illegal, horrifying, and public relations nightmare of pornography for good, the company is going scorched-earth on all adult content. Regardless of why the decision was made, the fact remains that this is a drastic move that makes little sense and risks alienating many creators and users of the microblogging site.

These creators and users have abided by all of Tumblr’s long-established rules and worked hard to create and consume perfectly legal content that is now being thrown out with the bathwater. People will have until December 17th to export a backup of their blog if they want to save their years of work, but that’s about all they can do.

Rather than invest in the employees, tools, and site infrastructure it would take to really take on their child pornography problem, Tumblr is burning itself down. [Full disclosure: I used to work at Tumblr in the Trust & Safety department, the very team tasked with cleaning up the worst of the explicit material uploaded to the platform.]

There’s no mention of child pornography in Tumblr CEO Jeff D’Onofrio’s blog post on the matter, of course, which is entitled, “A better, more positive Tumblr.” (The suggestion that NSFW content intrinsically creates a less positive environment is infuriating.) He writes that Tumblr has “given serious thought to who we want to be to our community moving forward,” and the answer to that seems to be “creepy overbearing parent.”

That so-valued-to-Tumblr community apparently does not involve anyone creating sexy fanart of their favorite fandom characters. Still welcome in the Tumblr fold, however? Nazis. White supremacists. Harassers. People spewing all kinds of hateful rhetoric. They can stay. If you’ve got female-presenting nipples and they’re out there, however, sorry, that’s going to get taken down.

Ah, yes, Tumblr, the site where ♀️nipples are banned faster than than white supremacist nazi blogs.

What D’Onofrio and his corporate overlords at Verizon’s Oath don’t understand—or don’t care about—is that this sort of adult content is frequently generated by women, marginalized people, and all sorts of creatives struggling in our vicious “gig economy.” They’re going to be hurt the most by the ban.

In Tumblr’s sex-based communities, many people run their own NSFW blogs, building out businesses on a platform that makes finding and sharing this sort of content easy, and allows them to be in control of their business model. They generate networks and fanbases, similar to how fandoms function. This is an outright attack on these sex workers’ livelihood.

stop being upset about tumblr being trending!!! People are literally losing their jobs. please start a conversation and support safe environments for sex-workers and nsfw artists. They’re human beings who aren’t afraid to express a side were always to afraid to show.

On the fandom side of things, fan artists who draw explicit artwork are, in the majority, women, often creating for other women. Some rely on commissions financially; their content also brings new users to Tumblr. These hard-working artists are being entirely abandoned by Tumblr, and it’s difficult to see why they wouldn’t all just decamp to Twitter now en masse.

The artists enrich their fandoms and audiences in countless ways, and their loss will be damning. Many other non-fandom artists have also used Tumblr for years as their portfolio, and now risk losing those works and their established presence online.

On a basic level of censorship, it’s troubling that art and illustrations that show nudity theoretically may be permitted, so long as no sexual acts are involved. Who determines what a sex act is? Is a kiss a sexual act? Need hands be above the waist, or is there no touching at all? Who decides what is explicit and what is not, what is art and what is not? What about GIFs of sex scenes from movies or TV shows? How much nudity or sexualization is too much for Tumblr’s algorithms?

Spoiler alert: these algorithms are already proving to be preposterous.

Some of my work that’s too adult for Tumblr:
– An illustrations for……. Forbes Japan (no nudity)
– Stills of an animation for Game of Thrones (surprisingly no nudity, actually)
– Digimon?? (…questionable design maybe, but no nudity) pic.twitter.com/d2YCKpqXiG

tumblr is cracking down on 🍑adult content🍆 and so many of my posts are flagged. is this philosophy babies comic flagged bc the guy’s eyes look like nipples, or because the ideas i’m putting forward are just too RADICAL?!?! pic.twitter.com/6B6P08WNzl

Twitter today is chock-full of examples of completely ridiculous flagged content—so beyond the egregious waste and disrespect of this policy, it looks like it’s going to be terribly implemented.

Further, these murky guidelines lend themselves to confusion and endless future headaches. Female-presenting nipples is an extraordinary statement, seeing Tumblr fall in line with platforms like Instagram which have faced backlash for not allowing bare female-presenting chests even in explicitly non-sexualized scenarios.

The assertion from Tumblr here is that female nipples are inherently sexual and thus banned—unless, of course, they’re being used for breastfeeding or directly following birth. Only in these highly mother-presenting scenarios can that dread female-presenting nipple rear its head on Tumblr. Or in a protest situation. But what sort of protest is protest-y enough to allow for nipples? Need there be a political slogan scrawled across the “female” chest? Tell us more, Tumblr.

This is disgustingly sexist and incredibly offensive to the audience of the queerest and most trans-inclusive social network out there.  Who, pray tell, will be the arbiters of what constitutes a female-presented nipple?

sweet, now with tumblr i can do the experiment i’ve always wanted, where i post pictures of my bare chest every day while i’m on hrt and wait for the exact point they become illegal

Tumblr has also lost sight of the fact that plenty of users—including culturally important figures—may have labeled their blogs “NSFW” out of courtesy to their readers, because on occasion they reblog content that could be constituted as such. The company risks losing influential people who had their blogs on Tumblr for ease of sharing and connecting with fans.

Welp, my Tumblr blog is marked NSFW, bc I curse like a sailor and occasionally I reblog fanart, fine art, and protest art that contains nudity. (Yes, including FEMALE-PRESENTING NIPPLES.) So I guess my Tumblr blog will be on the chopping block too.

So where we goin’ next, y’all?

Three-time Hugo award-winning author N.K. Jemisin occasionally reblogs protest art with female-presenting nipples. Can’t wait for the algorithm to sort that one out. If she’s not the kind of person that Tumblr wants in its community, who is?

Here’s a secret about “algorithms” like the ones alleged to be in play on Tumblr: it’s almost always people tasked with making snap-judgment decisions. Very tired outsourced teams of people sorting through countless pieces of content, or idiot machines making snap-judgment decisions based on their limited, non-context-based programming. All that this new policy introduces is an unending stream of outrage, headaches for the kindly support team of awesome people who have to process takedowns and appeals, followed by users jumping ship as soon as a better option presents itself.

It’s clear to me that those in charge over in Tumblrville don’t give a damn about freedom of artistic and sexual expression nor care about what keeps Tumblr ticking along, so long as they don’t disappear from the App Store again.

I’m unbelievably disappointed in a platform that I once loved so much that I went to work for them. Even if Tumblr were to back-pedal now, the damage is done—content creators know that at any moment their creations could be deemed unacceptable and eliminated. Users have learned that their desire to shape their own communities and curate their own content doesn’t matter.

At least the Neo-Nazis are safe, and we can still harass each other with impunity, so long as no female nipples are presented.