And yet, the "reblog post as link" still hasn't been fixed yet.

In its exhaustive quest to prove to kids on the Internet that they’re totally hip and cool and their new parent company Yahoo is not running them into the ground, Tumblr has created a website which “compiles the top pop culture conversations within the Tumblr community.” Basically, it’s like Tumblarity but for fandoms. Hey, guys, remember Tumblarity? Gosh, I’ve been on the Internet for a while.

Through an exclusive announcement on The Hollywood Reporter, “Fandometrics”—which is not to be confused with an exhaustive 2014 survey of Supernatural fans that bears the same name— charts the popularity of TV shows, movies, celebrities, musical acts, video games, and “web celebs,” as complied by how many Tumblr users are writing about them on their own blogs. At the end of each week the site will post the results with links that allow you to search each subject, along with a marker which shows how they’ve risen or fallen through the ranks since the previous week. 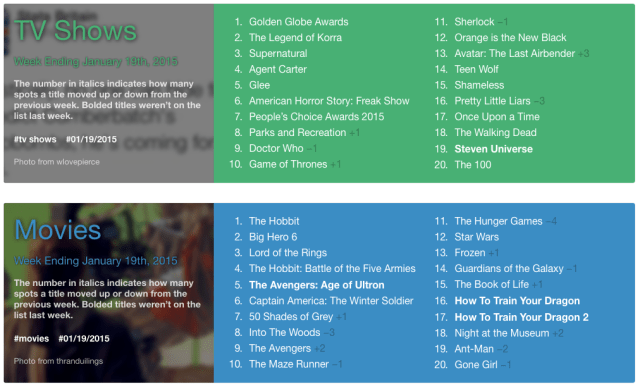 Wow, Night at The Museum made top 20? Props for surprising me, nerds of Tumblr.

“Smart social marketers are moving away from measuring success in terms of real-time conversations, instead focusing on building momentum through influential fan communities that serve as powerful brand advocates,” said Tumblr’s director of media Sima Sistani, noting that the site will be especially useful for Yahoo’s favorite users—brands. “Tumblr is the epicenter and home of fandoms, and our Fandometrics provides a colorful and meaningful glimpse into the zeitgeist.”

Well, she’s not wrong. As annoying as it is when Tumblr attempts to commodify and market fan communities while tweaking the site’s design constantly without any mind to what its users actually want (who else misses being able to click through a video post to Youtube?), this is hella useful for people like your friendly The Mary Sue staff, who need to know what the Internet’s talking about on a constant basis in order to do our jobs. Plus, who doesn’t want to be able to quantify the magnetic hold that The Legend of Korra has on all of our lives?