Get the rest of the human interaction you're ever going to have out of the way before this game launches, because afterwards it might be hard to leave your house. 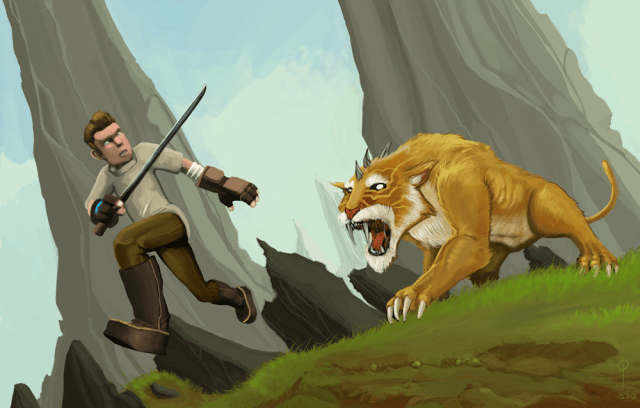 Nerd Kingdom‘s got an idea for an innovative, intuitive sandbox adventure game that looks pretty sweet. Now thanks to their successful Kickstarter campaign, they’ll be able to complete TUG in time for a January 2015 launch. In related news, we can’t believe this is the first we’re hearing about this project, because it sounds like pretty much the best thing.

Created by a dedicated team of scientists, designers, artists, programmers, and other creative types, Nerd Kingdom seeks to make TUG (which technically stands for “The Untitled Game”) a truly open world that reacts to virtually every move the player makes fluidly and realistically. As in Minecraft, the players will be able to shape, build, and craft different tools and objects within the world, but they’ll also be able to follow a loosely designed narrative that tells an engaging story without any cutscenes. While the character models look a little stylized, they’ll exist in a world that stays pretty true to real-life physics. Even your inventory will be susceptible to this, the campaign info says — no more bags of infinite holding that can carry even the hugest of broadswords.

Check out the video introduction to the Kickstarter, which outlines all the major goals of the project:

And here’s a shorter, wordless video that features some of the cool physics and lighting that the game is able to make possible:

TUG‘s Kickstarter campaign began on May 1st and just recently achieved their goal of $215,000 with the help of over 5,000 backers and counting; there’s also a little time left in the campaign if you’d like to pitch a bit in yourself. Alpha testing begins July of this year and is open to those who’ve contributed $65 or more. I’m just a poor blogger, so I will probably have to wait until  2015 to get a glimpse of this game (probably longer, since I’m also a dumb Mac user), but judging from the awesome videos on the Nerd Kingdom YouTube Channel, it looks to be worth the wait.