No One Wants to Advertise on Tucker Carlson’s Racist Show 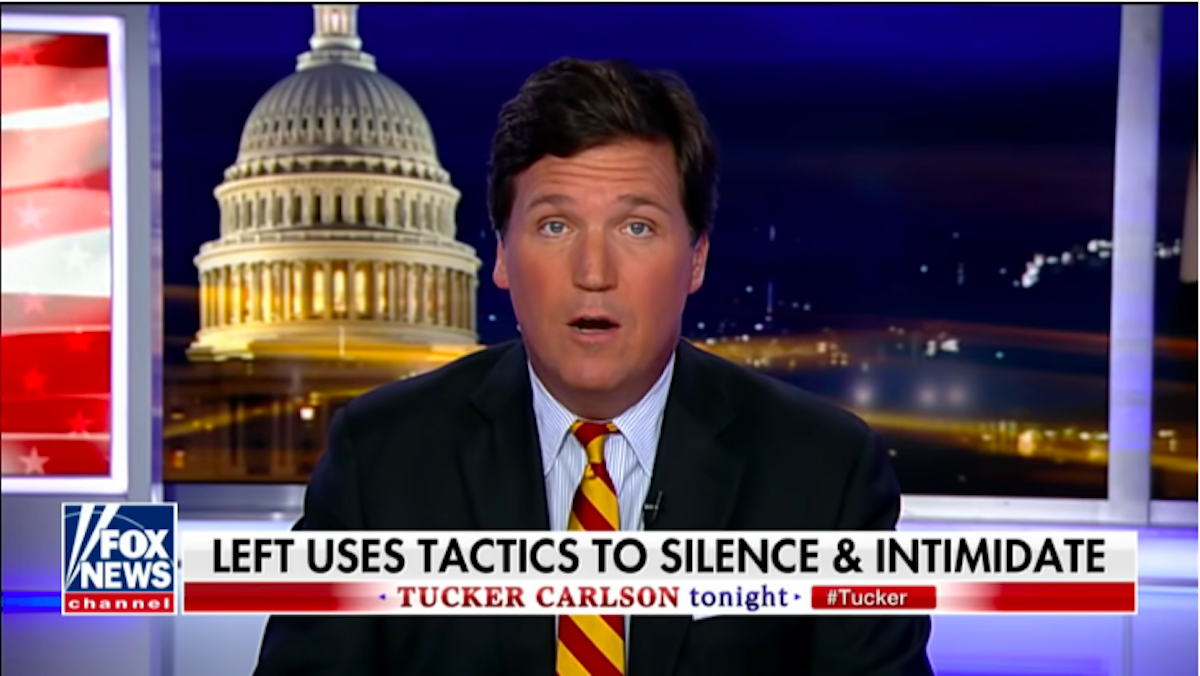 Over the last year or so, Fox News’ racist dog whistles have been growing less and less coded and more often it’s just hosts going on air and saying the quiet part loud.

The latest example of overt racist rhetoric being shouted from their studios is Tucker Carlson accusing immigrants and asylum seekers of making America “dirtier.”

He expressed that sentiment on his show last week, and immediately, people started putting pressure on advertisers to drop the show.

But on Monday, Carlson didn’t back down. Instead, he doubled down on his message, saying “The left says we have a moral obligation to admit the world’s poor. Even if it makes our own country more like Tijuana is now, which is to say poorer and dirtier and more divided.”

We saw @TuckerCarlson say on national TV that immigrants make our country “dirtier.” He said immigration makes the U.S. worse-off, and called immigration “a form of atonement.”

The was racist and offensive.

As of today, at least 16 advertisers have announced that they’re participating in a boycott of Carlson’s show, including Ancestry.com, Samsung, NerdWallet, Minted, Indeed, and IHOP, which gave this strong statement:

NEW: @IHOP drops Tucker Carlson: “We will no longer be advertising on this show.”

“We stand for welcoming folks from all backgrounds and beliefs into our restaurants and continually evaluate ad placements to ensure they align with our values.”https://t.co/uGqWmPTEcd

As you might expect, Carlson and Fox News are attempting to frame this as a free speech issue, saying he’s being censored.

“We cannot and will not allow voices like Tucker Carlson to be censored by agenda-driven intimidation efforts from the likes of Moveon.org, Media Matters and Sleeping Giants,” Fox News said in a statement. “Attempts were made last month to bully and terrorize Tucker and his family at their home. He is now once again being threatened via Twitter by far left activist groups with deeply political motives.”

As we’ve talked about here before, Tucker Carlson and others like him (like Laura Ingraham, who also suffered a sponsor boycott after she mocked victims of the Parkland school shooting) aren’t talking about “political issues”–or, at least, that’s not what people are calling for a boycott over. What Carlson does is racist, xenophobic fearmongering. He erases the realities of immigration and conflates all immigrants into one poverty-stricken, crime-riddled, “dirty” mass. There is a reason why he is beloved by white supremacists. Even if he doesn’t share their beliefs, he encourages them to believe he does.

Statistician and writer Nate Silver took to Twitter to criticize the boycott.

Jack is right. The logical endpoint of deeming advertisers to have endorsed the political messages of the shows they run ads on is that only milquetoast both-sidesism with a pro-corportate bent will be advertising-supported, if any political content is ad-supported at all. https://t.co/R5yrH0jN3o

I tend to agree that Tucker is a racist, or at least that he convincingly plays a racist on TV.

However, I don’t want the PR department of Applebee’s deciding for us all what’s racist vs. legitimate/acceptable political speech. https://t.co/UetgQ4Ab9U

I understand the fear that both sides of the political aisle can weaponize sponsor boycotts and that there is a possibility that that could result in valuable, hard-hitting outlets having a hard time finding funding. But again, this isn’t about politics. It’s about bigotry. There are plenty of other shows on Fox News for which no one is calling on their advertisers to leave.

But Nate, this is akin to saying black people in Montgomery should not have boycotted busses because white people were already boycotting black schools. The fact that a tactic can be used for just or unjust purposes doesn’t mean you should never engage it. https://t.co/hL5vXNy2EI

By the way, here’s a list of advertisers who are sticking by Carlson, if you’re interested in contacting them or changing your shopping habits one way or the other.