Toys We Saw At The TTPM Spring & Summer Showcase, Including Mattel’s BOOMCo Blaster Line and More

Never have I wanted to be eleven years old again more than I do in this exact moment. 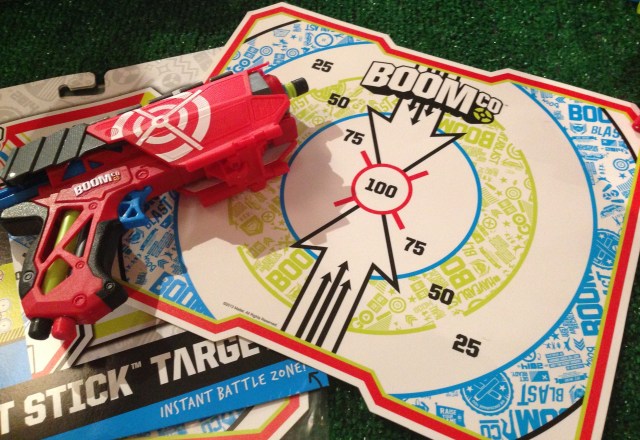 Hosted by TimeToPlayMag, The TTPM Spring & Summer Showcase is an event in NYC where toy companies get the chance to show off their latest products on an up-close and personal level. We got invited to check out the upcoming Mattell BOOMCo line of blasters, as well as a bunch of other nerd toys that we had a hard time keeping our hands off of.

Make sure you scroll down to the bottom of the post to check out our gallery of images from the event!

Obviously we were the most excited for the Mattel BOOMCo line, and for good reason. This is the first line of its kind that Mattel has ever put out, and they’re putting a lot of effort into making sure that their blasters are different from all the competition (i.e. Nerf). The darts have a special “Smart Stick” material on them that only adheres to the patented surfaces they provide, which of course come with targets printed on them (though eventually you’ll be able to go on their website and customize your own target).

The blaster in the above video (Farshot) is the smallest of the bunch, but definitely felt the most comfortable to me — the second I picked it up, I immediately wanted to grab another one and start moving targets down dual-handed like Black Widow in The Avengers.  I’ll also admit, I don’t think I’ve ever been able to get a Nerf dart to stick on any surface in my entire life, so seeing the Smart Stick darts actually land on the targets and stay there was incredibly satisfying — though I should point our that the darts can get a little twisted and bent at times due to their plastic bodies.

The blasters were also very lightweight and good for smaller hands — which might not be the best for some adult players, but definitely for kids and absolutely for my tiny fingers. Every one of the blasters also has a retractable guard covered with the same Smart Stick surfaces, with the expectation being that if somebody shoots you, you can defend yourself with the guard, pluck the dart off of it, and fire it back. The Smart Stick material is a novel approach, and great for first-time blaster buyers who don’t already have a whole lot of darts on hand from competing brands.

Of course, while we were at the TTPM showcase, we wanted to check out some other products as well. Mattel also has a new remote-controlled flying car called the Hot Wheels RC Street Hawk, which can fly up to 150 feet in the air and which is made of lightweight, surprisingly durable hobby foam. It’s a toy best suited for outdoor play, but we were able to fly it around a little bit downstairs and were impressed by how maneuverable it seemed.

There were also plenty of cool action figures and proprietary toys, such as this stupidly awesome Transformers: Age of Extinction tie-in from Hasbro, the Grimlock Flip and Change. The old Transformer toys were great, but they definitely didn’t transform as fast as this one does, and especially not when they were this size and this complicated. Seriously, you literally just pull a lever with the Grimlock one and all of a sudden it is a dinosaur. And the glowing eyes! Be still our nerdy hearts.

For younger kids, there were toys like the Teenage Mutant Ninja Turtles Action Bubble Blowers from Little Kids. Little Kids’ whole business model is creating bubble-based products but without the mess of a regular ol’ wand and tub. In the case of the Action Bubble Blowers, it basically means that you get an unyielding, constant stream of bubbles the second you own the turtle’s mouth.

These were all the videos we took, but we also got a lot of great pictures of some of the other products available, from a 3 foot tall Godzilla monster to ridiculously detailed Minecraft and Pokémon action figures.