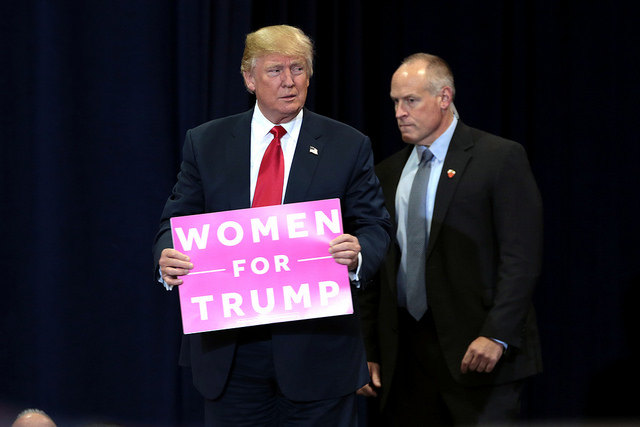 Today, April 4th, is Equal Pay Day, designed to shine a light on the disparity in pay between men and women. The day is always in April, to mark the date to which women have to keep working to earn as much as men made the previous year. (Likewise, it’s always on a Tuesday to demonstrate how long women have to work to catch up to men’s earnings the previous week.) And that’s only taking the American average into account. The wage gap only widens, depending on where you look.

Any way you look at it, there’s a pay gap that actually widens at higher education levels: https://t.co/xCZmOlKBrV #EqualPayDay pic.twitter.com/5PaAVbkxdt

Given that Trump just declared April National Sexual Assault Awareness and Prevention Month, Mike Pence was honored with a “Working For Women” Award, and Ivanka Trump, who has a history of speaking up about things that affect (certain) women, now has an official job in the White House, this administration must care about this issue a ton, right?

No, of course not. Instead, Donald Trump repealed President Obama’s Fair Pay and Safe Workplaces order from 2014.

#EqualPayDay is a reminder that women deserve equal pay for equal work. We must work to close the gender pay gap! https://t.co/CcwsoBXWdF

Oh, sorry, I was just reading about how your dad rescinded Obama’s Fair Pay order which provided paycheck transparency. You were saying? https://t.co/ihuJBOTB6T

Trump actually repealed the order last week, but did so so quietly it seems to have slipped through unnoticed. The order was designed to make sure companies with federal contracts comply with labor laws. The order directly affects women workers by requiring paycheck transparency. So for all the Twitter trolls in the #EqualPayDay hashtag declaring the wage gap couldn’t possibly exist because that would be illegal, the repeal of this order means federal contractors don’t have to provide proof that they’re following that law. So … honor system, I guess?

Additionally, the order also put an end to “forced arbitration” clauses. Forced arbitration is a way to cover up complaints of sexual harassment or assault, as well as violations of Title VII of the Civil Rights Act, which protects against wage discrimination. It means the complaints can be handled privately rather in in public court. From NBC,

“Arbitrations are private proceedings with secret filings and private attorneys, and they often help hide sexual harassment claims,” said Maya Raghu, Director of Workplace Equality at the National Women’s Law Center. “It can silence victims. They may feel afraid of coming forward because they might think they are the only one, or fear retaliation.”

When Gretchen Carlson came out with her sexual harassment allegations against Roger Ailes, the head of Fox News, we all heard about it because she specifically worked around her mandatory arbitration clause by suing Ailes directly, rather than the company.

The wage gap and sexual harassment: two things we already knew Trump doesn’t care about, but he apparently wanted to remind us anyway.

Today is #EqualPayDay. This is what @realDonaldTrump has to say about women closing the #PayGap pic.twitter.com/1fykJ5eiuB