A Reminder that Donald Trump Is Spectacularly Bad at the Internet 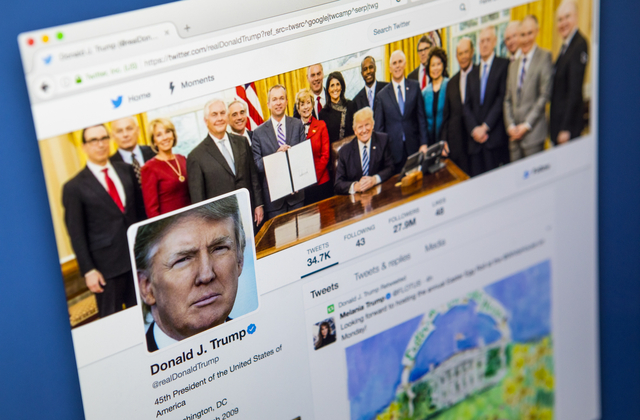 Is Donald Trump great at navigating the internet, or terrible at it? It’s not the easiest question to answer. His 3 a.m. tweet storms, public personal attacks, and total refusal to acknowledge the innate fact-checking abilities the internet’s permanence allows–all of this basically means Trump lives at the point where total ineptitude curves back around to actually being upsettingly effective. There’s not so much a method to his madness as an overwhelming flailing that exhausts his critics and opponents.

Case in point: when Trump tweets out his lies and attacks with such force and frequency, how is any one tweet supposed to rise to the top? Is he going to have to start practicing restraint in measuring his words so that when he has something extreme to say, we take notice? No, of course not. Instead, Trump got attention yesterday for superimposing one of his own tweets about the day’s Russian intelligence hearing onto his Twitter banner photo, making a sort of ludicrous Super Tweet.

That’s the imbecilic equivalent of turning a tweet up to 11, rather than adjusting the existing tweet settings.

Obviously, the internet was ready.

“Getting a staffer to Photoshop your tweet denying collusion with Russia into your banner image” is untold levels of Not Mad pic.twitter.com/M2kUZkkG2W

How can this possibly fall anywhere near the category of good internetting? Well, the strangeness of the image is getting more attention than the lie of the tweet. And make no mistake, it is a total falsehood.

Not only is that Trump’s Twitter header, that is absolutely not what Clapper said! pic.twitter.com/fO1cUdQ6uh

What James Clapper, the former director of national intelligence said, in response to a question about whether Russian hacking influenced the outcome of the election, was that “the intelligence committee has neither the authority, the expertise or the resources to make that judgement. The only thing we said was we saw no evidence of influencing voter tallies at any of the 50 states.”

For one thing, voter tallies are only one aspect of what election hacking can potentially entail. Also, the main point of the entire hearing was to discuss conversations Michael Flynn had with Russian officials. The quote Trump pulled two words from, then, not only doesn’t disprove collusion, but has nothing to do with the day’s primary focus.

Trump excels at distractions, mainly because–if those distractions are deliberately strategized–he doesn’t seem to have any problem with offering his own foolishness up as the target of the misdirection. After a few hours of ridicule, though, he did replace the banner with a different picture, sans superimposed tweet. But the internet never forgets.

Speaking of not forgetting the idiotic things Trump and his team do on the internet, this week the White House also deleted every press release put up on donaldjtrump.com prior to January 1st of this year. Like, for instance, his pledge “to immediately repeal and replace Obamacare” from November 1st of last year, or his 10-point “New Deal for Black America” which I’m sure he’ll get started with any day now.

And of course, who could forget the classic “Mexico pays for the wall” gem, complete with a plan to intercept money those living in America might be sending to their families in Mexico? 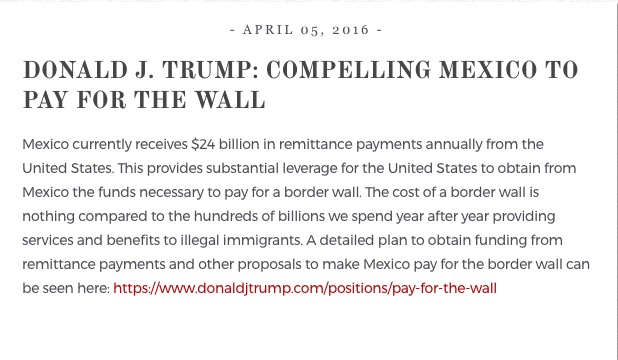 All of these have now been removed from the website. It’s almost like Trump’s team has never heard of internet archives, and people’s love of digging up stuff the government tries to hide. (*coughthanksWaybackMachinecough*)

Even more stunning is the deleted press release for Trump’s Muslim ban, which is the one that first brought attention to the removals. The White House took down the document, which used blatantly discriminatory language, “calling for a total and complete shutdown of Muslims entering the United States until our country’s representatives can figure out what is going on.”

Except Trump’s staffers are so bad at the internet, they didn’t even delete the page. They just deleted the body, leaving the prejudice-ridden URL.

so someone needs to tell the White House Head of Blogging that hitting backspace 1200 times doesnt delete the URLhttps://t.co/84jhYo5zhX pic.twitter.com/ji6H2NAOEv

@MikeIsaac Viewing the source does not bring any more confidence either… pic.twitter.com/GAwaoNJN9l