Because he wasn't already enough of a racist cliche. 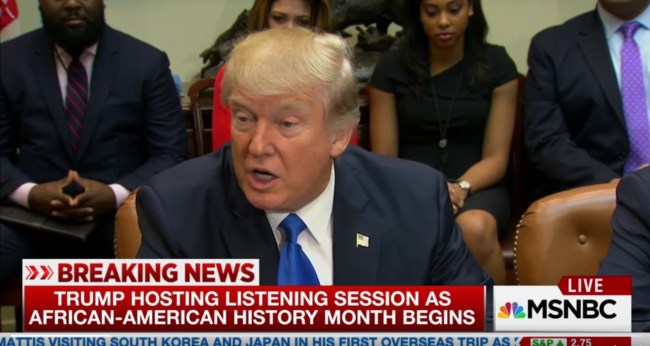 Never mind the fact that whenever Trump speaks, he sounds like a child playing dress-up and pretending to be President, earlier this morning he hosted a “listening session” to kick off Black History Month, and proceeded to give the most tone-deaf, self-serving, and muddled statement he could’ve possibly given on such an occasion.

For those of you who, like me, can’t take more than a few seconds of listening to him speak, here is the full transcript of his remarks via The Nerdy Bird:

Let’s ignore, for now, the fact that his disjointed speeches always sound like he cut words out of a magazine, shook them up, and pasted them down wherever they fell. Beyond that, there are several troubling things about his remarks, particularly as a kick-off to a month celebrating black Americans and their contributions to this country:

But please, tell us more about how Ben Carson is such a good pal.

Honestly, a speech like this at a “listening session” for Black History Month from Donald Trump doesn’t surprise me. It merely highlights what a majority of the country already knew about Trump when they didn’t vote for him, and far too many people who did either agreed with, or chose not to see. Unchecked racism, hiding in plain sight.