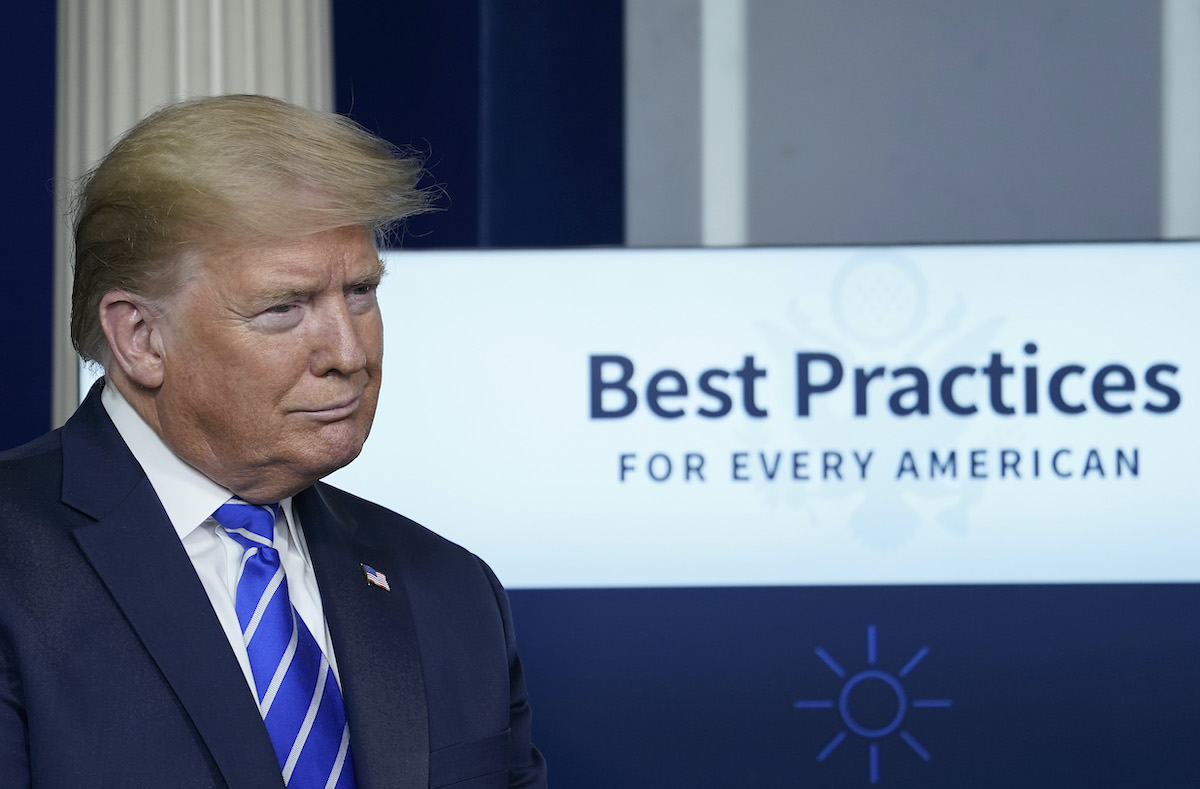 I can’t believe we’re having to say this but please, please, do not drink or inject yourself with bleach. That’s not advice we’d normally feel the need to give, but Donald Trump is choosing to suggest the practice as a possible treatment for COVID-19. So to be clear, consuming bleach will not kill the coronavirus, though it would likely kill you.

During his press briefing Thursday, Trump started speculating about some … unusual treatments.

Dr. Trump on curing #coronavirus: Suppose if we hit the body with a tremendous light whether its ultraviolet or just a powerful light…[or] brought the light inside the body…the disinfectant [also] knocks it out, [so perhaps we could] inject it inside.”pic.twitter.com/2rtQdri7sC

“So, supposing we hit the body with a tremendous–whether it’s ultraviolet or just very powerful light,” he mused, adding that Bill Bryan, the head of Homeland Security’s Science and Technology Directorate, was planning to test this. “Supposing you brought the light inside the body, which you can do either through the skin or in some other way.”

“And then I see the disinfectant, where it knocks it out in a minute.  One minute.  And is there a way we can do something like that, by injection inside or almost a cleaning.  Because you see it gets in the lungs and it does a tremendous number on the lungs.  So it would be interesting to check that.”

Y’all are acting like you’ve never seen a 73 year-old drug addict wearing Depends and a dead ferret on his head stand at the WH podium and tell Americans to drink bleach and shine a light up their butts to kill a virus, six weeks into global pandemic, before. @realDonaldTrump

For some context, Trump’s comments came right after Bryan spoke and he did, in fact, discuss the effect of light and bleach on the virus … in “potentially contaminated indoor spaces” (emphasis mine because it’s a freaking important distinction).

Trump’s comments forced cleaning brands as well as the Surgeon General to offer statements asking people to please not do what he was suggesting.

The Surgeon General of the United States, whose salary is paid by all the nation’s taxpayers, and who tells us to eat our vegetables and not to use tobacco, can’t bring himself to say:

Don’t inject or ingest bleach or other disinfectants. https://t.co/iZgO4JKYA3

“Under no circumstance should our disinfectant products be administered into the human body through injection, ingestion or any other route,” a Lysol spokesman says. https://t.co/OdF2ZKAntm

Pretty incredible that we’ve come full circle and Boomers are about to eat tide pods.

I think you can see the exact moment Trump’s medical advisor Deborah Birx’s soul leaves her body during his ramblings.

The White House, by the way, had to revise their transcript to reflect the fact that when asked directly, Birx did not, in fact, agree with Trump that heat and light are not an effective treatment for the virus.

The first transcript the White House sent had Birx bolstering Trump’s idea of applying “light and heat to cure.”

“That is a treatment,” it quoted her saying.

The transcript has now been corrected to say, “Not as a treatment.” pic.twitter.com/ao1znYh1ep

Trump is now claiming his comments were “sarcastic,” while his terrible press secretary says they were “taken out of context,” neither of which is true.

No, Trump wasn’t directly advising anyone to drink bleach. And he did specifically say that he’s not a medical professional and that he wants to see what they have to say about these things. Actually, his exact words were “I’m not a doctor. But I’m like a person that has a good you know what.” So there’s that.

But he did repeatedly say the idea–which he himself came up with–sounds “interesting.” And as we’ve been seeing with hydroxychloroquine, his heavy-handed speculation on possible medical treatments can have serious consequences.

It was injecting disinfectants to cleanse the lungs.

Please don’t poison yourself because Donald Trump thinks it could be a good idea.

Remember when Republicans got mad when the Obamas told people to eat more vegetables. https://t.co/9Ga84ilaMR