Is Donald Trump Treating The Simpsons as Prophecy? 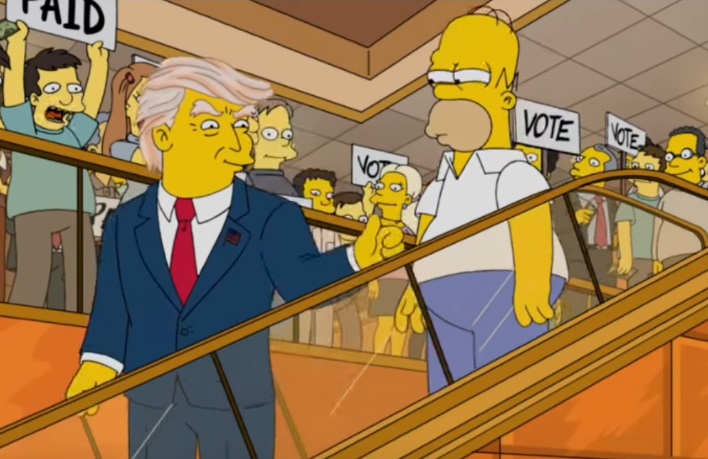 What if Donald Trump already knows he will become the 45th President of the United States?

What if, after watching The Simpsons episode “Bart to the Future”—which actually predicts a Trump presidency—he has slowly but certainly become convinced of its prophetic veracity (just as he has become convinced he was always against the war in Iraq)?

What if this is why, earlier this year, Trump said “I could stand in the middle of Fifth Avenue and shoot somebody, okay, and I wouldn’t lose any voters, okay?”

Now, if you were Donald Trump and already knew you were going to win anyway, wouldn’t you want to have a little fun with it? Sure you would. And where would be the fun in acting all composed and presidential, being knowledgeable on the issues, sympathetic, trying to be a candidate for all Americans?

Come on, haven’t we had enough presidents already who promised to be of the people, by the people and for the people? That is so last two centuries. You can’t make your mark trying to be that guy in the Internet Age. No sir. In the Internet Age, you have to be LOUD and ridiculous. Fortunately, your talents in both these areas are unmatched by anyone in the history of the world (possibly the universe).

So you take the path never traveled. The path of calling a war hero a loser, of mockingly imitating a disabled person, of branding most Mexicans rapists and thieves (though some, you assume, are good people) and openly flirting with a total ban on Muslim immigration.

Nobody who acted like that would ever be elected President, right? Wrong.

You have it all figured out. The 2016 presidential elections are going to be the greatest, craziest, off the hook, roller coaster elections America—indeed the world—has ever seen. You, the hero, will come out of nowhere. The ultimate Washington outsider, facing down a plethora of experienced career politicians and beating them one by one, before arriving at the final, epic battle with the greatest career politician of them all: Hillary Rodham Clinton.

After the Republican Convention in late July, you are gaining on HRC. But of course it’s way too early for that. No self-respecting hero wins the day in the middle of the game. Only right before the end, when the odds are stacked so massively against him that nobody gives a dime for his chances anymore, does he swoop in and turn almost certain defeat into historic victory.

Just as you prepare to take to the airwaves and insult some random new group to help push your numbers down, the Pakistani-American parents of United States Army Captain Humayun Khan, who was killed in the Iraq War, offer a lending hand by criticizing you at the Democratic Convention. It works, your numbers are falling again. But to make absolutely sure your momentum is really stopped dead in its tracks, you insult the Gold Star mother in a subsequent interview, by implying she stood silently next to her husband at the Convention because she wasn’t allowed to speak.

A few weeks later, in the run up to the first debate, the Khan episode has faded from attention somewhat and you are once again gaining on Clinton. But it is still way too early to start your improbable comeback, so you give a shaky debate performance, gratefully taking every piece of bait Mrs. Clinton throws in your general direction.

After that first debate, Secretary Clinton’s poll numbers are on the march again, but this time you are determined to leave nothing to chance. So you call up one of the producers of “Access Hollywood” and remind him of that open mic conversation you once had on the bus with the show’s co-host, Billy Bush, where you said that “when you’re a star, they let you do it. You can do anything…Grab them by the pussy. You can do anything.”

Surely the numbers of any candidate caught on tape saying something like that would rapidly approach zero, right? Wrong.

In the third and final debate, on October 19, you throw in one last zinger by refusing to say you will accept the election results whatever the outcome may be.

Three weeks later your big moment arrives. Election Night. The polls have been consistently predicting you will lose big, but you know they’re wrong and Bart Simpson’s vision of the future is right.

In the early hours of November 9 you are sitting in front of the TV. And just before you take your baseball bat to pulverize The Simpsons Ultimate DVD collection, you cry out that one word that perfectly sums up the pain of defeat, the frustration of stolen victory and the promise of resistance and revenge. Like a tortured William Wallace at the end of Braveheart, you scream it out one last time, for all to hear:  “R I G G E D ! ! !”

J.C. Peters is a legal philosopher and historian who frequently publishes about U.S. constitutional law, American and European history and foreign policy issues. He is also the author of the political thriller The Dog and its Day, about an assassination attempt at the Republican presidential candidate, now available on Amazon and other major online retailers. For more information, please visit JellePeters.com.