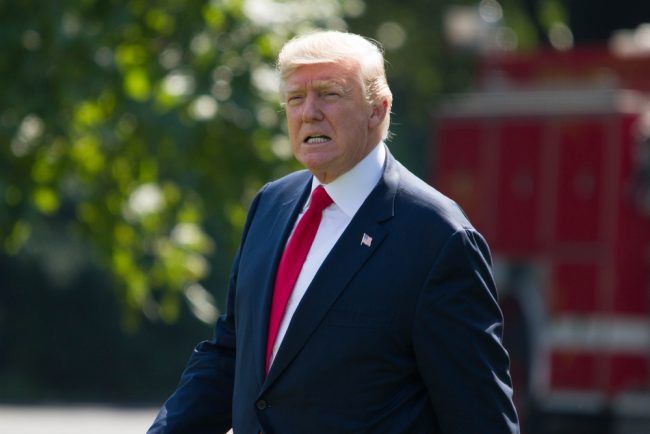 Trump has officially translated his racist indifference to the suffering in Puerto Rico into a loud, racist dogwhistle. After the Mayor of San Juan, Carmen Yulín Cruz, rebuked Homeland Security Secretary Elaine Duke for calling the events in Puerto Rico a “good news story,” and pleaded, “you are killing us with inefficiency and bureaucracy,” Trump tweeted the below:

…Such poor leadership ability by the Mayor of San Juan, and others in Puerto Rico, who are not able to get their workers to help. They….

…want everything to be done for them when it should be a community effort. 10,000 Federal workers now on Island doing a fantastic job.

This is, quite simply, a disgusting way to frame a humanitarian crisis. To Trump’s mind, leaders in Puerto Rico “are not able to get their workers to help.” Puerto Ricans just “want everything to be done for them.” When people of color – who are, let’s remember, American citizens looking for food and water from their own goddamn government – reach out for basic necessities and rebuilding after a devastating hurricane, Trump doesn’t hear a cry for help. He hears a bunch of lazy, entitled foreigners looking for a handout. I almost don’t have words for how repulsive it is that he just suggested people without electricity, without clean water, without sufficient food, medicine, or safe roads to travel on, should be bootstrapping themselves out of a natural disaster.

As TMS‘ own Teresa Jusino pointed out, many people don’t even know that Puerto Ricans are American citizens. Now, in sheer empathy terms, this shouldn’t matter. The U.S. sent thousands of relief workers to Haiti, a foreign country, when it was devastated by an earthquake in 2010 because that’s what sane and compassionate people do. Puerto Ricans aren’t more human because they’re American.

But their citizenship does make Trump’s comments all the more insidious and racist. Even brown people who pay taxes and have legal citizenship don’t get to be treated as regular, hard-working Americans by someone like Trump. These comments lay bare the fact that all his talk about “illegal” and “rapist” immigrants has nothing to do with the law, or (Lord knows) protecting women. It’s about viewing non-white Americans as forever foreign and forever undeserving of basic protections.

While the people of Florida and Texas, because those states contain large blocs of white Republican voters, deserve and require aid, the people of Puerto Rico should be grateful for whatever they get. If they dare to point out how the government is failing them, they’re being uppity, lazy, and entitled. Trump’s thinking here is as transparent as it is despicable.

In addition, by portraying the people of Puerto Rico as layabouts who won’t contribute to their own aid, by whining that they “want everything to be done for them,” Trump plays into toxic, longstanding racism around “lazy” Latinxs. These images and ideas, which show up in Texas textbooks about Mexican-Americans, which are routinely promoted by people like Ann Coulter, and which are often specifically applied to Puerto Ricans, portray Latinxs as less industrious, and therefore less worthy of drawing on any of the many social welfare programs or basic government services that millions of white Americans benefit from. Like the anti-black myth of the “welfare queen,” this idea of the hurricane-ravaged Puerto Ricans as lazy and entitled serves a political purpose: reframing a call for justice as a greedy whine, and reframing a group’s mistreatment by the U.S. government as something that’s somehow their fault.

As always, the best antidote to Trump’s racism is your own activism. I’d urge you, if you haven’t already, to pressure your representatives to help Puerto Rico, or (finances allowing) donate to aid organizations.

(Via CNN; image via Shutterstock)