The Internet Is Calling Attention to the Crisis in Puerto Rico, and Calling Trump Out 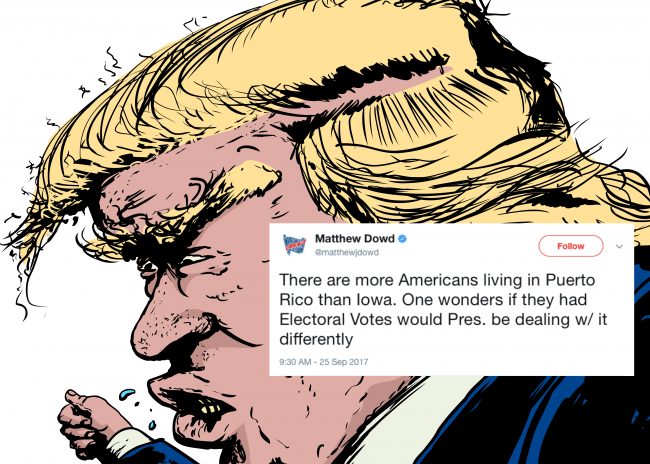 Donald Trump spent the weekend having Tweetstorm fits about black athletes who kneel during the anthem in order to protest police brutality and social injustice. Meanwhile, the 3.5 million American citizens in Puerto Rico are facing a massive humanitarian disaster. Trump is fiddling while Puerto Rico drowns.

Puerto Rico, and the US Virgin Islands, are U.S. territories and their residents are American citizens. But because they are not formal states, the islands lack Congressional representation, voting power, and Electoral College votes, and thus do not wield the kind of political power in Washington that Trump and his ilk care about. So a complete lack of urgency has greeted the incredibly dire situation there. While some measure of aid has begun, Trump passed the weekend picking a fight with the NFL and the NBA and squawking about the flag and patriotism instead of talking about the real suffering of American citizens.

Contrast Puerto Rico’s devastation to the political and media attention on hurricanes in Texas and Florida. This is one instance where social media is proving valuable in trying to refocus the conversation from Trump’s antics to the lives and blood that will be on his hands without significant U.S. aid and response. And people have taken disaster relief into their own hands, which restores some of my faith in humanity but isn’t the way this is supposed to work.

Hawaiian Senator Brian Schatz would like everyone to remember:

From a friend in Puerto Rico: “We prepared for the worse, now we need to prepare for what we couldn’t even conceive could be the worst.”

This is not soon enough, by any stretch of the imagination.

Hi sorry to interrupt your dot dot dot but the American citizens of Puerto Rico don’t have electricity or drinking water. https://t.co/BQiT8gUKi8

Puerto Rico is facing the possibility of more than 6 months without any electricity. But more immediately, they face a lack of food, injuries, disease, infrastructure collapse, failing hospital generators, and a myriad of other logistical issues that amount to a humanitarian nightmare.

“No drinking water. No food. No medicine. No dialysis. No insulin. No homes. No fuel for generators. No president.” https://t.co/oUfkVIE71i

Imagine if the people of Puerto Rico could vote in America’s national elections:

Imagine your home is flooded, you’ve lost power, you don’t know if it’ll get better, and you see the President is busy uninviting NBA stars. https://t.co/ZU4YprrANt

The fact that Puerto Rico remains a colony of the United States in 2017 is bonkers. 3.6 million American citizens with no American voice.

Why isn’t this huge and growing humanitarian crisis in Puerto Rico commanding more attention and action? Too busy on anthems and epithets.

Here’s what a competent President would be doing right around now, in the mirror universe where I wish to live:

President Trump, Sec. Mattis, and DOD should send the Navy, including the USNS Comfort, to Puerto Rico now. These are American citizens. https://t.co/J2FVg4II0n

Never forget that this is the GOP and Trump’s joint priority:

Fighting to repeal health care while millions of Americans in #PuertoRico are struggling to find shelter is unconscionable.

I knew I wasn’t the only one who kept hearing echoes of “heckuva job, Brownie” all this awful weekend. But at least Bush acknowledged the disaster at his doorstep, even while he terribly botched the response:

By the way, Trump’s Katrina is happening right now in Puerto Rico. He’s trolling the NFL while an entire US territory is devastated.

The Governor of Puerto Rico is begging for help:

3.5M American citizens in Puerto Rico need a functioning President. Instead, they get this pic.twitter.com/wWNHwDcQh8

[on the brink of nuclear war]
[devastation in puerto rico]
[health care debate]
TRUMP: the big football boys are disrespecting the flag!

Maybe Trump hasn’t been updated by his primary news source:

Dear Fox News, you could save some lives by covering the disaster in Puerto Rico so the President finds out about it.

Or maybe the residents should start marching with Tiki torches, screaming about nationalism, to get some attention?

White supremacy is a system that gives a hundred Nazis in Charlottesville more political power than 3.6 million US citizens in Puerto Rico.

Meanwhile, celebrities seem to be doing more for humanitarian disaster relief than the government:

We must help Puerto Rico now not later! Later is too late! Now! https://t.co/77q6GHXeII

Thanks to your generosity, first responders from NY are on a chartered plane em route to 🇵🇷. Don’t stop now: https://t.co/pxx7qvHPdf

And here’s what you can do, right now: