Another Day, Another Reminder from Trump: He Still Hates The Freedom of the Press 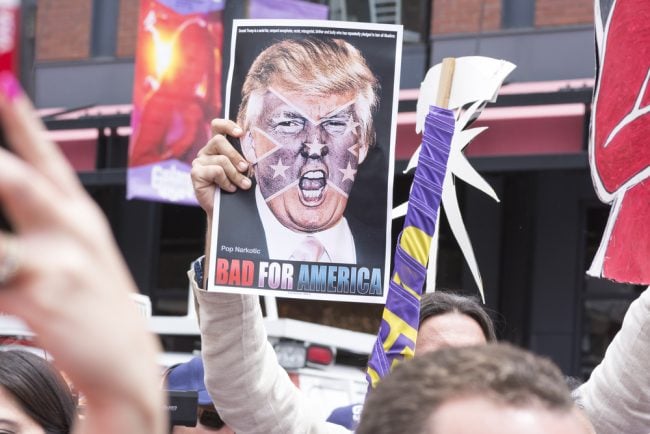 In yet another disturbing Twitter tantrum, Trump confirmed his hatred of the United States’ (relatively) free and impartial press. After NBC News reported that Trump wanted a tenfold increase of the U.S. nuclear arsenal, a move that would have put the U.S. in violation of international treaties, he flew into a rage on Twitter.

“Fake @NBCNews made up a story that I wanted a ‘tenfold’ increase in our U.S. nuclear arsenal,” he tweeted. “Pure fiction, made up to demean. NBC = CNN!” He then followed up with a not-so-veiled threat, asking, “With all of the Fake News coming out of NBC and the Networks, at what point is it appropriate to challenge their License? Bad for country!”

Fake @NBCNews made up a story that I wanted a “tenfold” increase in our U.S. nuclear arsenal. Pure fiction, made up to demean. NBC = CNN!

With all of the Fake News coming out of NBC and the Networks, at what point is it appropriate to challenge their License? Bad for country!

Trump continued to seethe after his Twitter storm, doubling down in a brief session with the White House press pool. “It’s frankly disgusting the way the press is able to write whatever they want to write,” he complained. “And people should look into it.”

President Trump: “It’s frankly disgusting the way the press is able to write whatever they want to write, and people should look into it.” pic.twitter.com/gT9FhI94tJ

Trump had previously attacked NBC News earlier this week, after the outlet published a report that Secretary of State Rex Tillerson had called Trump a “moron.”

.@NBCNews is so knowingly inaccurate with their reporting. The good news is that the PEOPLE get it, which is really all that matters! Not #1

While that October 7 tweet centers more on Trump’s inane, oh-so-presidential obsession—TV ratings—the attacks from today are far more chilling. It’s true, as Vox aptly summarizes, that Trump’s threat isn’t exactly credible. But that doesn’t make his tone any less troubling. Advocating that “people should look into” news networks who publish critical coverage, and questioning whether he can “challenge the[] License[s]” of outlets he disagrees with, is creeping, raging authoritarianism. It also represents yet another instance of Trump’s anti-press vitriol, which has ranged from calls to stop White House press briefings to literally declaring journalists the “enemy of the American People!”

In short, these tweets demonstrate, yet again, that Trump does not have the emotional maturity or basic civics knowledge to understand that—as former President Harry S. Truman said—”the buck stops here,” at the desk of the president. It is his responsibility to accept the criticism of the American people and their press, because he serves them—not the other way around. A functioning representative democracy rings with criticisms of the government, driven by the reporting in the press, because that’s how representatives receive feedback in between elections and face accountability during them. It isn’t a healthy democracy if all you’re hearing about is “Dear Leader” and his greatness. It isn’t a healthy democracy if the press gets too cozy and kind with the powers that be.

Most former presidents – many of whom could be terrible people in other ways—have understood this. Trump, however, rages at the most basic functions of a modern democracy—the free press, the rules of the legislature, the existence of the judiciary—for performing as they were intended to. He expects them to act as his sycophants and enablers, rather than as the necessary checks to his power and guarantors of the institutional knowledge and constitutional integrity that a massive federal government serving 323 million citizens requires.