Trump Threatens Free Press and a Private Citizen. In Other Words, It’s Friday in America. 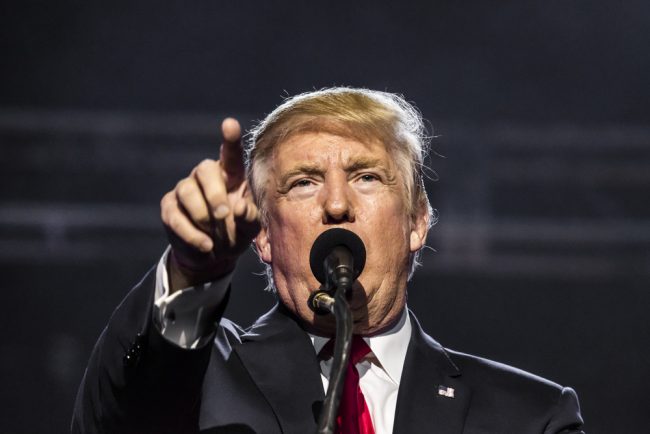 Our Tweeter-in-chief, who calls it “fake news” when outlets report on things he actually says and things that actually happen had another one of his patented Twitter rants this morning. With each rant becoming more and more disturbing, this one takes the cake for sheer efficiency—he managed to threaten the First Amendment and threaten a private citizen who is part of an ongoing investigation in, like, four tweets.

He also managed to slip in some comedy, too. I mean, check out this gem:

As a very active President with lots of things happening, it is not possible for my surrogates to stand at podium with perfect accuracy!….

Now, Trump himself has admitted that Presidenting is particularly hard for him, as it’s a far cry from his formerly cushy life of sitting on golden toilets and focusing solely on his own brand. Now, he has a whole country to think about, and that’s hard you guys. (You’d think that would have occurred to him before he ran for office.)

But the idea that he’s a particularly “active” President … that’s why his surrogates are incompetent? Does he think that other Presidents weren’t busy, and so they “had the luxury” of being able to “waste time” to choose/train a good team? Doesn’t that seem like, I don’t know, part of the job description?

Also, we’re not asking for “perfect” accuracy, we’re asking for accuracy period. Something we have yet to receive, especially since his own Press Secretary can’t seem to give straightforward answers to questions, and all of Trump’s cronies can’t seem to get it together on one story re: Comey’s firing. Then again, it’s likely hard to be completely accurate when your President (and his Ego) won’t talk to you, be forthcoming with information, and thinks they’re too “smart” for intelligence briefings.

Who’s the bigger fool? The fool, or those that follow the fool?

So, Trump has decided to take his incompetence, and that of his team, out on the press, completely forgetting there’s this thing called the First Amendment:

…Maybe the best thing to do would be to cancel all future “press briefings” and hand out written responses for the sake of accuracy???

I think Trump is mistaking the word “accuracy” for “My version of the truth.” I’m sorry, but having the state control the information the press receives, rather than allowing them to ask their own questions and do their own investigating? That’s some straight-up North Korea shit right there. Or, you know, Russia.

You know what else feels really Russian (and when I say “Russian,” I mean the Russian government, not the Russian people. Sadly, we’re on the same page as far as having a government that not only doesn’t represent us, but is out to actively harm us for profit)? A President threatening people that are testifying against him and his interests.

He’s already done this once before this week when he threatened Sally Yates on Twitter. Now, the target of his ire is James Comey. You know, the former FBI director that Trump didn’t think worth firing until he knew he was being investigated? That’s the one!

James Comey better hope that there are no “tapes” of our conversations before he starts leaking to the press!

When most people use scare quotes, it’s generally to point out something false, or to discredit an idea. When Trump uses them, though, they only seem to emphasize true things we should actually be afraid of. Like our President illegally recording conversations between him and the former FBI head. Even if there are no “tapes” and Trump is just trying to scare some kind of mistake out of Comey, here we have a sitting President taking to Twitter to cyberbully compliance from those testifying against him.

I’m starting to get whiplash from looking at all the ways in which Trump and his Administration are running this country into the ground. If their control of the House and Senate concerns you, consider checking out Swing Left, an organization that is working to shift the numbers in Congress. Because this administration is not “normal,” nor should it be tolerated.