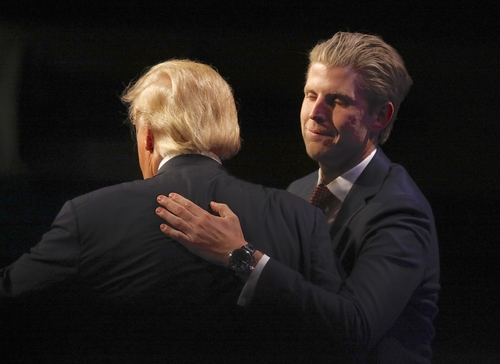 In recent interviews, two of the Trump men — Donald himself, and his son Eric — each made comments regarding women and sexual harassment in the workplace that demonstrate how little they understand (or perhaps care) about the issue. Even worse, they used Ivanka Trump as an example to defend wholly anti-feminist rhetoric.

In an interview with Kirsten Powers at USA Today, when Donald Trump was asked about what he’d think if someone harassed his daughter Ivanka the way his friend Roger Ailes, former chief at Fox, has been accused of doing to female employees, Trump gave the most clueless of responses. He said, “I would like to think she would find another career or find another company if that was the case.”

No words about how gross the harassment itself is? No desired repercussions for the perpetrator of said harassment? M’kay.

According to Mediaite, in a later interview on CBS This Morning, Eric Trump defended his dad’s comment by sort-of denouncing sexual harassment saying, “Listen, we all run a company, my father runs a company, that is an absolute no-go anywhere, and that’s very much the case.” If you go over to Mediaite and watch the video of the interview, you’ll see that the middle Trump son is not really great with the whole Putting Words Into Sentences thing, so a part of the awkwardness of this can be chalked up to him just not speaking well.

But his words are “that is an absolute no-go anywhere,” and he stumbles and stutters for those words, clearly worried about answering this questions. “No-go” can mean anything. “No-go” as in that behavior is not tolerated, or just doesn’t happen. “No-go” as in “we’re not going to go there” (i.e., talk about it or address it in any way).

However, it’s the second part of his statement regarding his father’s comments about Ivanka that was even more problematic:

“Ivanka is a strong, powerful woman. She wouldn’t allow herself to be, you know, objected [sic] to it.”

Because she was a “strong person,” Eric said, she probably would go to human resources if it did happen. “At the same time, I don’t think she would allow herself to be subjected to that. I think that’s the point he was making and he did so well.”

Mister Trumps Plural, if you have the time to read this while going around pretending to be “regular guys,” allow me to fill you in on the main reasons why all of these comments are garbage:

In an interview with People Magazine last month, Ivanka said, “I’m a daughter, not a clone. So of course daughters often disagree with things their fathers say. But I share my viewpoints with him privately, not publicly. I’m not the candidate.” While the decision to not participate in the public conversation on this issue is a questionable one for someone with her platform and influence (particularly one who supposedly champions #womenwhowork), here’s hoping that this is one of many topics that she talks to her father about in private.

She publicly praises her father’s “feminism,” citing the fact that he has many female executives in his companies. However, it takes more than thinking women capable of holding down a difficult job to be a feminist. Feminism is not just about #womenwhowork. It’s also about women who don’t work. It’s about women with money, and women without money. It’s about women of all races, religions, body types, and abilities. It’s about respecting all women as human beings who don’t deserve to be constantly situated at the lower end of a power dynamic (like what happens when a woman is sexually harassed) simply by virtue of their gender.