Fuck No, “Many Sides” Are Not to Blame for Charlottesville. White Supremacists Are. 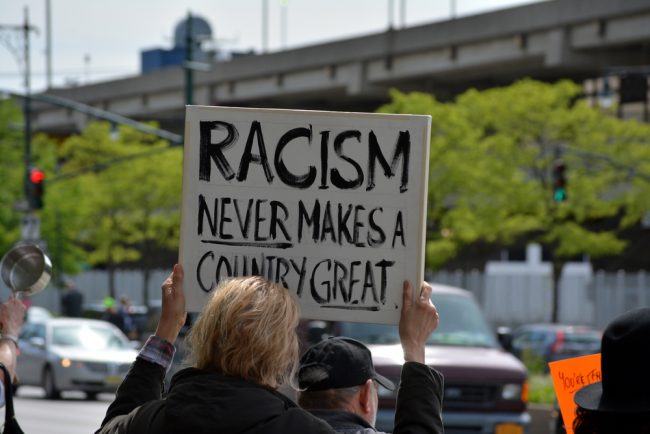 Down in Charlottesville, Virginia, the governor has declared a state of emergency after a Unite the Right rally turned violent and disruptive. Fights have broken out, pepper spray has been rampant, and plenty of attendees were openly armed. One anti-racism protester has even been murdered, and nearly 20 injured, after a car plowed into a crowd of demonstrators.

POTUS on Charlottesville: “We condemn in the strongest possible terms this egregious display of hatred, bigotry and violence on many sides” pic.twitter.com/fXJtgpfxwC

“We’re closely following the terrible events unfolding in Charlottesville, Virginia. We condemn in the strongest possible terms,” he stated, obviously reading from his written statement, “this egregious display of hatred, bigotry and violence on many sides.”

“On many sides,” he repeated, suddenly dropping his reading-from-the-page voice.

“What is vital now is a swift restoration of law and order, and the protection of innocent lives. No citizen should ever fear for their safety and security in our society. And no child should ever be afraid to go outside and play, or be with their parents and have a good time.”

I just…Fuck this “many sides” crap. Fuck not condemning white supremacy. Fuck not calling this “rally” what it was, and fuck Trump’s cowardly, dancing-around-David-Duke false equivalencies.

And, sure. The law is the law. However you may feel about the relatively absolute freedom of speech granted by the First Amendment, and whatever the possible political effectiveness of violent resistance may be, the president of the United States is supposed to defend the constitutional rights of U.S. citizens. And so Trump is doing by his job by condemning people on the left who pepper-sprayed Nazis for spewing hateful shit, since spewing hateful shit is their (unfortunate) constitutional right.

So, sure – standing up to Nazis may be violence sometimes, but it’s not bigotry. It is not hatred. It is in fact resistance to those two things. That’s where Trump’s fundamental false equivalency lies.

The bigotry and hatred are coming from one side: the side of the Nazis, neo-Nazis, alt-righters, white nationalists, and white supremacists who showed up in Charlottesville, Virginia to spew racism, anti-Semitism, homophobia, and misogyny. It’s coming from the people who believe they should be able to kick whole swathes of people out of the United States based on the color of their skin, or the accent they have, or the nation of their birth. It’s coming from the people who say reprehensible things about Jewish people, who believe women should be subjugated, and who spout their sketchy version of “evolutionary psychology” (the phrenology of our times, I swear) to justify demeaning and depriving their fellow humans.

It’s not coming from the people singing “This Little Light of Mine” to drown out Richard Spencer and his ilk. Seriously.

What’s more, white supremacist violence is particularly, increasingly deadly in Trump’s America. In Charlottesville, a car mowed down anti-racism protesters, leaving one dead and nearly 20 people injured. Assuming this was intentionally aimed at the counter-protesters (it definitely looked that way, but I could be wrong), this is yet another American death caused by a white supremacist this year. In February, an Indian immigrant was murdered in Kansas by a racist who’s since been indicted on hate crime charges. In May, an “alt-Reich” supporter murdered a young black soldier in Maryland. Also in May, two men were murdered in Portland for defending teenage girls against an Islamophobe.

White supremacist terrorism is killing Americans, but the president of the United States won’t condemn it. He wants to blame “many sides,” as if this were complicated. As if the root cause of the problem wasn’t already apparent.

But it’s plenty apparent to many other Americans.

A President’s job is moral leadership. He has failed. There are NOT many sides to this.

Imagine if Eisenhower had said of the Little Rock Nine, “We condemn the bigotry and violence on many sides.” pic.twitter.com/HZJQZF6WEP

Dear @realDonaldTrump: There are “many sides” to white nationalist bigotry, but only one color. Are you afraid to name it? #Charlottesville https://t.co/bLZYuoBPpF

(Via NPR and ABC News; image via Shutterstock)