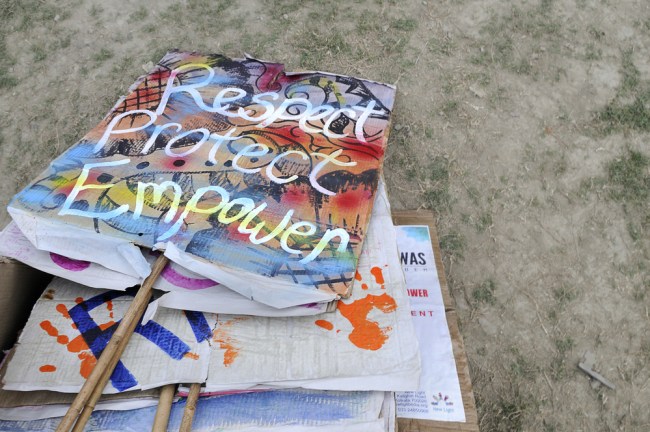 Two men on the Portland MAX were stabbed to death after they defended female passengers from a white supremacist’s anti-Muslim hate speech. They have been identified as Ricky John Best, from Happy Valley, Oregon; and Taliesin Myrddin Namkai-Meche, from southeast Portland. A third man, Micah David-Cole Fletcher, from southeast Portland, was also stabbed but is expected to survive.

You are American heroes. We love you Taliesin Myrddin Namkai Meche & Ricky Best. We will remember your courage always. #Portland pic.twitter.com/YdOdPr3nf6

The men intervened when they heard Jeremy Joseph Christian, a known white supremacist, shouting at two young women, one of whom was reportedly wearing a hijab. In their report, the Portland Police Bureau wrote that Christian’s shouts “would best be characterized as hate speech toward a variety of ethnicities and religions.” The intervention enraged Christian, who killed Best and Namkai-Meche and came inches from killing Fletcher. The two women were able to flee.

Best was a 23-year U.S. Army veteran who leaves behind three sons and a daughter. He worked for the city of Portland, according to Willamette Week, helping with permits in the construction department. Best is the second U.S. soldier murdered by a white supremacist in less than a week, after Second Lieutenant Richard Collins III was killed in Maryland.

The soldiers we lost this week in the US were 2LT Richard Collins III and SFC Ricky Best. pic.twitter.com/r2RVEVfVkC

Namkai-Meche’s family released a statement about his life: “Taliesin Myrddin lived a joyous and full life. His enthusiasm was infectious. We lost him in a senseless act that brought close to home the insidious rift of prejudice and intolerance that is too familiar, too common. He was resolute in his conduct (and) respect of all people. In his final act of bravery, he held true to what he believed is the way forward. He will live in our hearts forever as the just, brave, loving, hilarious and beautiful soul he was. We ask that in honor of his memory, we use this tragedy as an opportunity for reflection and change. We choose love. Safe journey Taliesin. We love you.”

Buzzfeed has more stories and family statement for both victims, as well as Micah David-Cole Fletcher, who writes poems about social justice. I encourage you to read about their lives.

In addition, because this is America, the victims and their families will have to cover the medical and funeral costs of this tragedy. GoFundMe pages have been set up to help with both. This fund is for Micah David-Cole Fletcher’s medical expenses, and this fund is for the families of the deceased. (Spokespeople for GoFundMe have reportedly vouched for both campaigns.) The Muslim community of Portland has also raised more than $150,000 for the victims on LaunchGood, and they invite donors of all faiths to contribute.

(Via Buzzfeed, Portland Mercury, and OregonLive; image via Shutterstock)