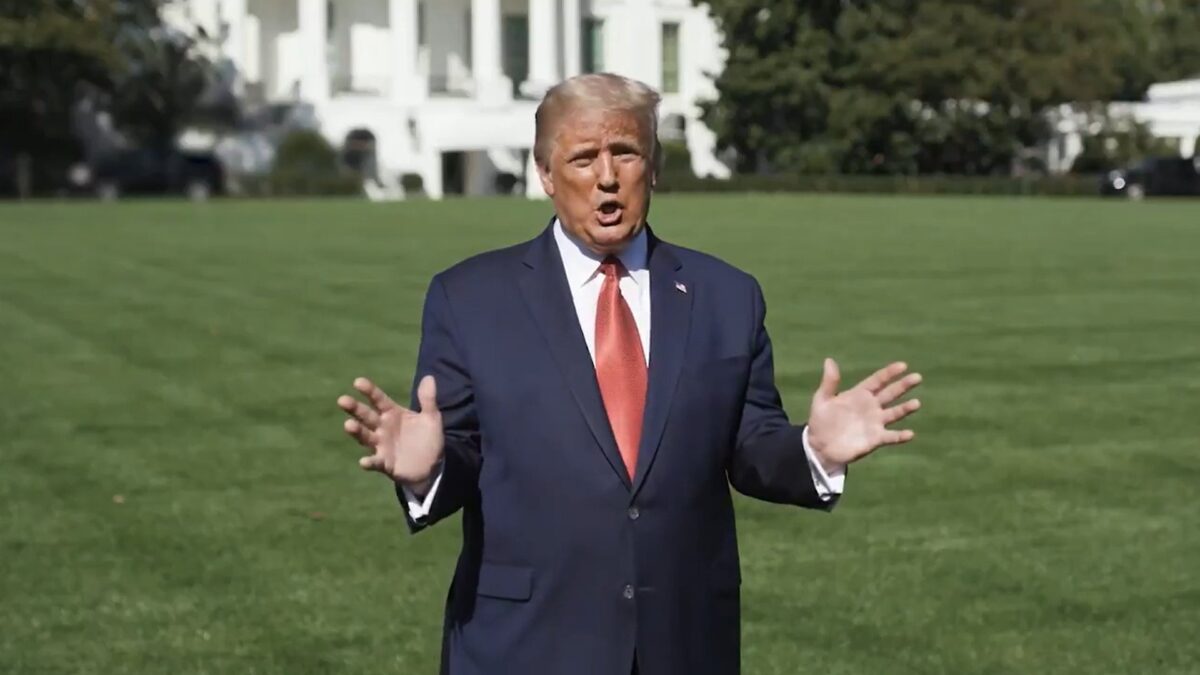 Donald Trump’s absolutely bizarre, dangerous, and reckless behavior since he left Walter Reed medical center hasn’t stopped. The President apparently thinks the best way to prove he’s not dying from COVID is to show himself out and about, ranting like even more of a lunatic than usual while he’s hopped up on steroids.

His latest video contains baseless lies about COVID having a cure (it does not) and the Chinese sending the virus to the US intentionally (they did not) and having to “pay for it” (they will not). But the weirdest lie came not in Trump’s sound and fury signifying nothing, but in the setting he chose to place himself in. Yes, it certainly seems like that sunny White House lawn scene … was a green screen.

The first person I saw call it out was Mike Schur, yes THAT Mike Schur who created Parks and Rec and The Good Place and know a bit about production and special effects.

If we did green screen work this bad on a TV show our DP would resign in disgrace. https://t.co/Za3XD8OMCI

But others provided proof:

2/ Trump faked this video released today. It’s shot in front of a green screen, the background is fake & on 3-second loop. Is Trump so unwell that he can’t even step outside to film a video?

Attached is zoomed in video of the bushes to the right. On loop. pic.twitter.com/cVIUTu3qSk

The looping trees and the way Trump looks like a paper doll against a fake background are the main clue this could be fake, but others contest that:

By claiming that it’s green-screen you’re giving too much credit to the producers. It means they lit him with very realistic direct sunlight (in a large studio), added wind effects on the hair, had him speak in a tone appropriate for exterior and added subtle street sound design.

I mean, I personally think they shot him outdoors much closer to the White House in front of the screen, maybe even on a balcony?

The possible use of green screen also raised some big questions…

Yeah, Donald, if you’re okay with fake digital publicity for tweets, why are you so afraid to debate Joe Biden digitally?

But of course, the best part was the jokes, which helped us ignore the utter inanity and insanity of what Trump was actually saying.

I know everyone thinks Trump did his latest video in front of a green screen but honestly I don’t see it pic.twitter.com/dLhBFs5VpH

Far be it for me to suggest that Trump’s latest “No really, I’m FINE” video was done in front of a green screen, but here are the people who drove him to the set. pic.twitter.com/XMFhjZgDYz

We honestly have no idea if this was as fake as Trump’s tan or his “cure” but what we should really be scared by is that the President is ignoring medical advice, endangering his staff and all Americans, and using a massive platform to spread more lies. But I guess it’s not quite 25th amendment time yet?

House Speaker Nancy Pelosi said she will talk about the 25th Amendment on Friday, which outlines how a sitting president can be removed by the vice president and cabinet https://t.co/u70GnViyHh pic.twitter.com/nQREG1Kj93

Well. I’m sure tomorrow will be a normal one!