You Can Airbnb Trump’s Childhood Home, Which Is More Terrifying Than Any Haunted House

you can @Airbnb the childhood home of @realDonaldTrump. stay surreal, 2017 ✌🏻https://t.co/TcmM27CtU3

It came to our attention today that Donald Trump’s childhood home in Queens, NY is listed on Airbnb for $725 a night. While the listing itself is already questionable as I imagine the kind of people such an opportunity would attract (either hyper-fans or people ready to destroy it), the descriptions of the home itself are so bizarre this goes to another level of weird.

“In 1946, Donald Trump was born to Fred and Mary Trump, and brought home to Jamaica Estates. Here they lived, in a home built by Fred himself. This is their home. 5 bedrooms, 3.5 bathrooms, 15 beds and 2 sofa beds.” That sounds innocent enough, right? Well, that is until you look at the images of the apartment which is filled with framed photos of Trump and framed fun facts like this one: 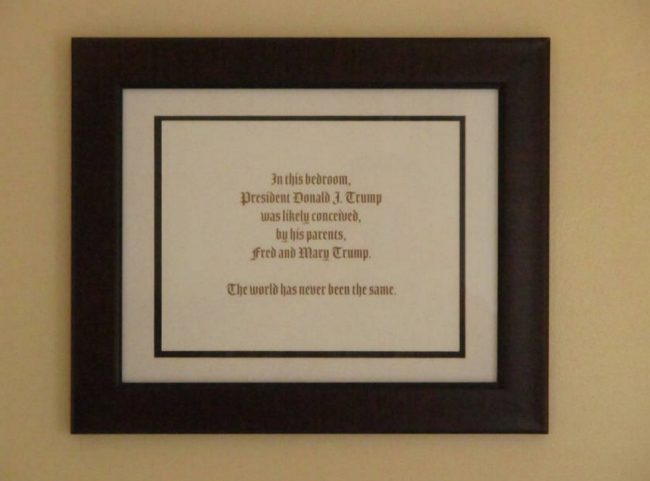 I HAD TO SEE THAT AND NOW YOU DO TOO. Yes, that is a sign that says Trump was “likely conceived” in this particular bedroom, followed by an ominous “The world has never been the same.” Also, framed photos of Trump quotes. 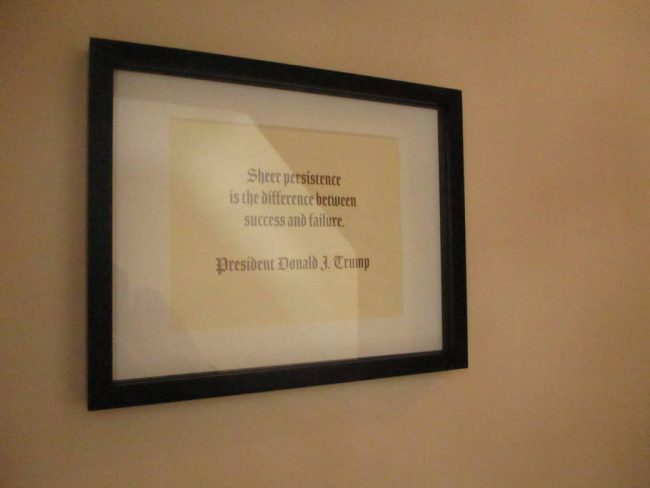 Still feel like staying in this haunted house? Another description from the listing mentions that in addition to the many photos of Trump, “There is a giant cut out of Donald in the Living Room, he is a great companion for watching Fox News late into the night…” 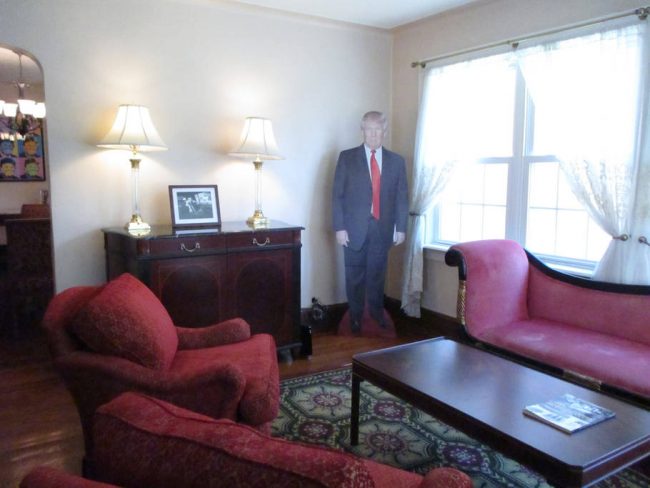 NOPE NOPE NOPE. Jessica described a scenario where this cut-out moves on its own when you’re not looking at it, so good luck getting any sleep with that though in your mind.

Now, as for who takes care the house and guests, the profile is run by “Donald J Trump Childhood Home” while stating, “This listing has no relationship with the White House, the President, Donald Trump or the Trump organization in any way.” The individual mentions, “Guest[s] have access to the entire house but should note that I live in one of the bedrooms which will not be accessible to you during your stay.”

That’s some Bluebeard shit. This is some Get Out shit, and you will not be returning after your stay. If you do return, you will never really feel whole again. Shadows in the shape of the Tweet bird will follow you, a headache as you’ve never experienced will strike every time Fox & Friends airs, and snakes will be inexplicably drawn to you. You’ll hear slow, deliberate knocks on your door, but no one will ever be there when you answer. There are currently no reviews, so naturally I assume that means no one has ever returned from the secret dungeon that’s no doubt hiding beneath the surface of that ugly carpet.

I am fully sure that the one room you’re not allowed to enter is full of sentient nightmares and a portrait of Donald Trump that ages backwards and contains his decaying, tortured soul. If you’re a brave soul willing to enter and break the curse, please do.