Learn the Ugly Facts About the Even Uglier Anglerfish [Video] 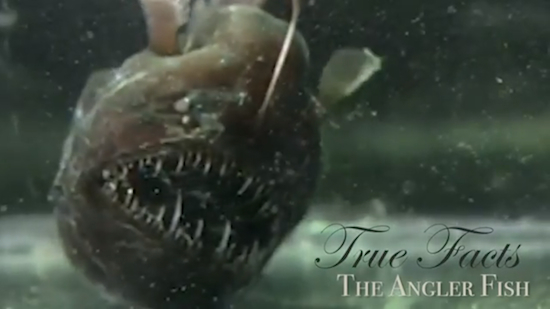 We assume the reason people don’t take the time to engage in a thorough, extensive study of the anglerfish is because one can’t go five minutes without getting nauseous looking at the thing. Really, it’s that aesthetically repulsive. In spite of the anglerfish’s horrendous visage, the world does know a few things about its natural behavior and other nuggets of knowledge that may walk that fine line of being too much information. Enter YouTube user zefrank1 and his groundbreaking documentary on the runner-up for most disgusting aquatic life form to swim Earth’s vast oceans. After the sea cucumber, of course.

Aside from learning that female anglerfish don’t really appreciate males latching on and transmuting into an obnoxious pair of gonads, shrimp, apparently, can be done in by their own overwhelming vanity. To tell the truth, we never saw shrimp as the kind of animal that would take pride in its appearance.