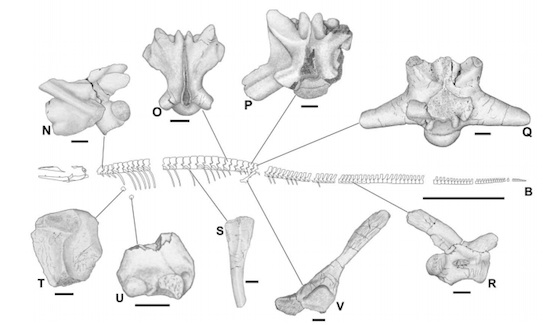 Researchers from the Hungarian Natural History Museum and University of Alberta have discovered fossils that they believe represent the world’s first real river monster — a never-before-identified breed of mosasaur that thrived in fresh water rather than open ocean. The specimens represent the first evidence of mosasaurs — initially land-dwelling reptiles that returned to the sea like modern dolphins and whales — who left their ocean habitats in favor of freshwater homes like rivers, developing adaptations that would have let them thrive in the new environments where they were likely to top of the food chain.

While clearly related to its sea-dwelling cousins,  the newly identified species — Pannoniasaurus inexpectatus — was on the small side for a mosasaur, the better to navigate the tighter confines of the rivers where it made its home. Keep in mind though, that “the small side for a mosasaur” means the creature was a mere 20-feet-long, and probably could have killed you just by thinking about it. The new mosasaur had also adapted to river life with a flatter head than many of its kin, which probably would have given it a crocodilian visage, and had a tail that was more adapted for river navigation.

Discovered in Hungary in a rock bed that researcher do not believe has ever been deposited in the ocean, and would have once been flood plains. Laszlo Makadi, the lead author of the study describing Pannoniasaurus inexpectatus in the journal PLOS ONE, says:

“The evidence we provide here makes it clear that similar to some lineages of cetaceans, mosasaurs quickly adapted to a variety of aquatic environments, with some groups re- invading available niches in freshwater habitats. The size of Pannoniasaurus makes it the largest known predator in the waters of this paleo-environment.”

In other words, these mosasaurs may have left the ocean in favor of being big fish in small ponds. Ok, well, big marine reptiles in comparably small rivers. You get the idea.