If you're looking for another reason to be afraid of sharks, some of them can smack you with their tail. 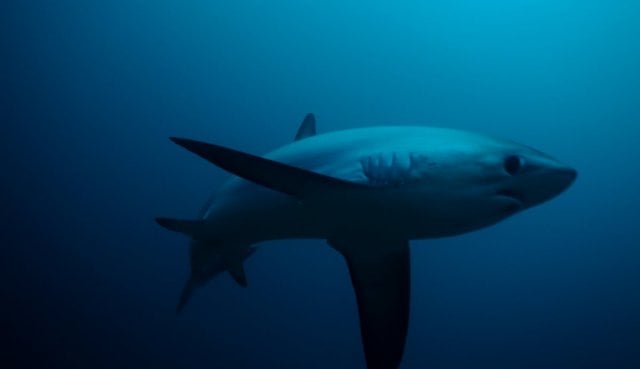 Thresher sharks have prominent tails that scientists believe are used in hunting. Exactly how they use their tails to hunt was never well documented until recently. A new study analyzed footage from multiple hunting events to better understand just how the sharks go about slapping sardines. Fun fact: The sharks tail-slaps are so powerful they can release dissolved gasses out of the water into bubbles.

61 observations of the sharks were filmed with handheld underwater cameras at Pescador Island in the Philippines. 25 of those observations were of hunting events. The hunting events were observed at all hours of the day. Thresher sharks don’t care what time it is, because when you’re a thresher shark it’s always time to eat some tasty sardines, or at the very least just slap them around a little.

It turns out that slapping sardines is a pretty complicated process, and the study breaks the tail-slaps down into several phases. They are preparation, strike, wind-down recovery, and prey item collection phases. The sharks spend the most time in the preparation phase, because when you’re slapping sardines you want to be sure to get a really solid wind-up going into it.

The goal of the tail-slaps seems to be to stun the shark’s prey long enough for the shark to devour it. It appears as though the shark’s tail has evolved for the purpose of tail-slapping, and it’s done so quite well. Whatever else this study can teach us, one lesson is clear: Don’t mess with thresher sharks unless you want to get slapped.

(via PLOS ONE, image via Klaus Stiefel)