The Trailer for 'The Kitchen' Is Finally Here | The Mary Sue

The First Trailer for the Female-Led, Comics-Based, Dark AF Crime Drama The Kitchen Is Finally Here!

We finally have our first look at Tiffany Haddish, Melissa McCarthy, and Elisabeth Moss in the upcoming gritty period crime movie The Kitchen. The adaptation of Ollie Masters’ graphic novel was first announced early last year and I have to admit, I’ve been so excited, I’ve thought about it at least weekly since. And this trailer does not disappoint.

The Kitchen centers around three women—Kathy (McCarthy), Ruby (Haddish), and Claire (Moss)—married to Irish mob leaders in 1978 Hell’s Kitchen. When their husbands are arrested, the women decide to take over the business and end up taking to it all too well. 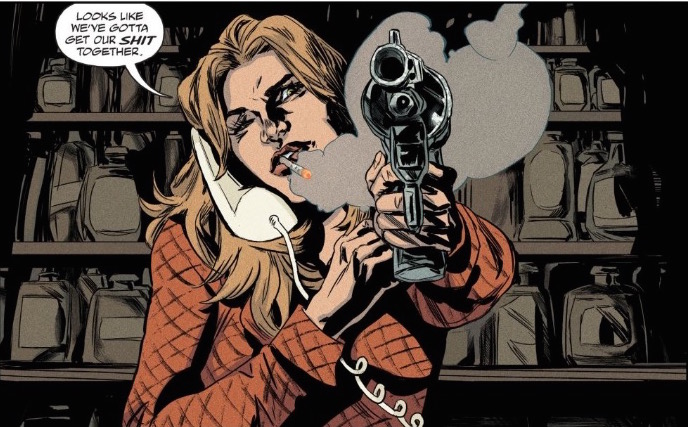 The 2014 DC/Vertigo graphic novel is a hell of a read. It’s dark and intense—making it so interesting that this cast is stacked with comedic actors. The film, which is the directorial debut of Straight Outta Compton co-writer Andrea Berfloff, also looks to have really captured the unsettlingly beautiful seediness of that 70s New York feel that artists Ming Doyle and Becky Cloonan so nailed in the comic.

This shot just about sent me into hysterics. 42nd Street in the ’70s was seedy, yes, but so symmetrical! pic.twitter.com/dlYVthZohB

The Kitchen is part of a rising trend, along with shows and films like Good Girls and Widows, about women turning to crime and violence in order to survive and then turning out to be really good at those things.

They turn their desperation into power and autonomy and obviously, a life of crime is not without its own issues, both in terms of ethics and safety, but with the popularity of this trend, there’s obviously something there that a whole lot of women can relate to.

What do you all think of the trailer for The Kitchen? Are you counting down the days till August 8th?