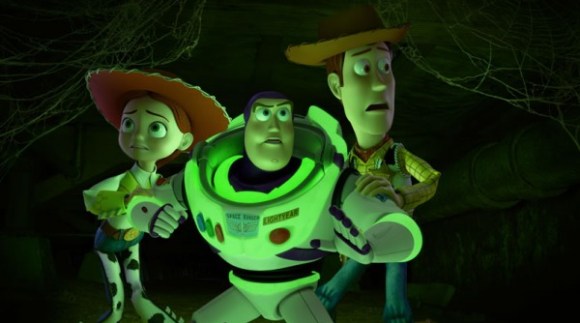 We were excited to hear Toy Story was getting a Halloween Special but we finally have a few more details as well as this first image. The half-hour short is set to air on ABC and is called Toy Story of Terror. TV Guide reports:

[It] follows the adventures of the toys post-Toy Story 3, in which a fun road trip takes a very unexpected turn. “Bonnie is on a road trip to go see grandma with her mom and the toys are in the trunk,” producer Galyn Susman says. “Mom gets a flat tire and they have to spend the night at a motel and all kinds of chaos ensues.”While Terror will include Woody (Tom Hanks), Buzz (Tim Allen), Mr. Potato Head (Don Rickles) and Rex (Wallace Shawn), Jessie (Joan Cusack) will have a more prominent role in the special. “We’ve gotten to see a lot of development in Woody and in Buzz and we felt it was Jessie’s turn to really show some growth.” Susman says.

About time, I’d say. Look for the special this October.