Will Tower Heist Pave the Way for Straight-to-VOD Movies? 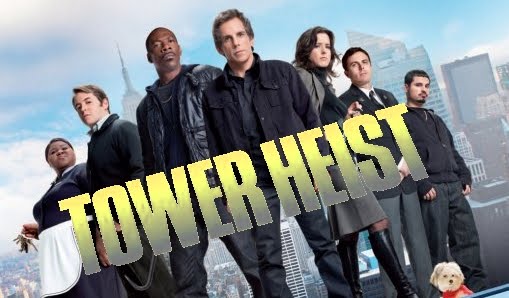 If you were not planning on buying a movie ticket to see the new Ben Stiller–Eddie Murphy movie Tower Heist, then … Universal Studios is way ahead of you. Coming to the humble realization that moviegoers are catching on to the pandering nature of star-studded casts in mediocre movies, the studio has come up with a novel plan to offer the Brett Ratner-directed movie on VOD a mere three weeks after its theatrical release as an experiment to see where it will be the most successful. Movie theaters are not thrilled with this … but shouldn’t they be psyched about all those Disney re-releases coming up?

This is a really interesting story, considering how movie theaters are finding such great (monetary) success in the 3D release of Disney’s The Lion King that upcoming 3D releases have been announced for The Little Mermaid and Beauty and the Beast, plus Pixar‘s Finding Nemo and Monsters, Inc. We’ve been pretty psyched to hear about a revival of the shared fan experience, communal moviegoing, and the valiant rescue of the movie theater industry. And now, this possibility of major studio movies going quickly to VOD is flying in the face of all that. Though there is a major difference: no established audiences.

Sure, Tower Heist has a ton of people in it that we like, or, at least, kinda like: Ben Stiller, Eddie Murphy, Gabourey Sidibe, Matthew Broderick (?!), Casey Affleck, and Alan Alda (!!), to name just a few. But this still remains an ensemble action comedy directed by Brett Ratner, who — notoriously — doesn’t try to make his movies smart. So, chances are that Tower Heist will be a) a critical failure with good box office numbers in its first week, b) a critical failure with bad box numbers from the start. The very presence of Eddie “Hit or Miss” Murphy is also just one reason why audiences might not go to see this in theaters.

But Universal Studios did make this movie with the intention of having people actually see it. So why ask them to leave their homes? Maybe it’s more of a microwave popcorn movie than an $8 popcorn movie, one of those “I would have liked it better if I hadn’t spent the entire day trying to convince people to change their plans and pay $12 to see this movie with me at a time and place that is actually not convenient for everyone.” And that’s what led them to try offering the movie on Comcast‘s VOD service in two cities — Portland, Oregon and Atlanta, Georgia — three weeks after its November 4 theatrical release.

There is a catch, though. The cost to those Comcast subscribers interested in participating in this business experiment is a not-at-all-cheaper $59.99. It should also be mentioned that Universal owns Comcast. So if you are going to be doing this, then the only way to really save money is to invite at least five people over to contribute to the cost and eat whatever food is already in the house. But again, this is still in the experimental phase.

Despite that, theater chains are really concerned about what this means for them. They are already worried about how new releases are available online (illegally) mere days after they offer it in their establishments, and now movie studios are throwing around the idea of big-budget movies making only fleeting visits to the big screen. Theater chains, both local and national, are so worried that they’re boycotting the movie altogether, saying that shrinking the theatrical window is a “dagger” to their business.

It’s a slippery slope, but mostly it’s just a strange, new world when 17-year old Disney movies top the box office and new big-budget movies will try to bypass it.