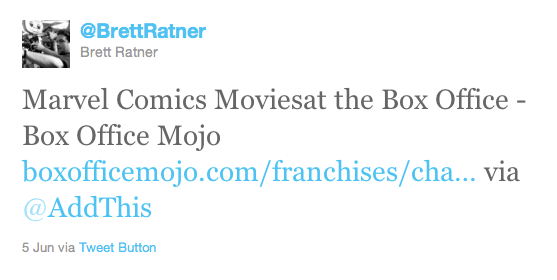 Looks like someone is a little bitterpants this morning. Brett Ratner, who directed the X-Men: The Last Stand, took to Twitter this morning to post a series of links comparing the box office numbers of his movie to those of Matthew Vaughn‘s just-opened X-Men: First Class. You may recall that Ratner’s movie, which he would love to remind us all was successful at the box office, got pretty awful reviews. Meanwhile, X-Men: First Class has been getting mostly positive reviews. (Right now, it has an 87% rating at Rotten Tomatoes. X-Men: The Last Stand boasts a comparatively sad 57%.) So, the moral of the story according to Brett Ratner: His craptastic movie is superior to that good movie because it made more money. So it shall be written. So it shall be done.

So, those all-important numbers: X-Men: First Class brought in $56 million over the weekend. X-Men: The Last Stand opened with $102 million. Congratulations, Brett Ratner. You had a financial success. And no one liked your movie. You’re a popular jerk. Or a Queen Bee. Here are the Tweets in question: 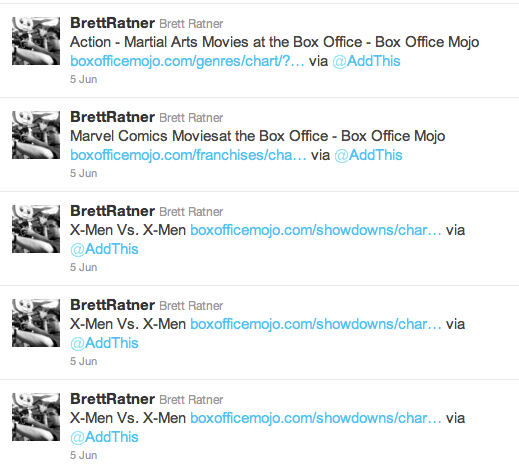 This is, at the very least, immature of Ratner. But what it definitely is is bitter. Why bother with this? Is he so consumed with his creative failure that he has to take his self-loathing out on someone trying to enjoy their own success? (Not that Matthew Vaughn cares what Ratner thinks, but anyway …) Ratner admits that he doesn’t care too much about “using his brain” the way his predecessor Bryan Singer did.

“Mine was the one that made the most narrative sense. And I’m not knocking Bryan’s movie but he just does a certain thing; Bryan uses his brain and I use my eye and my instincts more. It’s a whole different approach to making a movie. I’m not saying my movie wasn’t smart; I just wasn’t intellectualizing it.”

“I didn’t read the comic books but it doesn’t matter, the cartoon is the same f*cking thing.”

So, he cops to making a stupid, blow-em-up movie without any consideration for the story, characters, or quality of the franchise he’d taken on. That’s nice. Pajiba also points out that not only is $56 million nothing to sneeze at, but First Class doesn’t feature any huge box office stars in the cast like Hugh Jackman and Halle Berry. Also consider the other competing movies: Hangover II, Kung Fu Panda 2, Pirates of the Carribbean 4 … all of them with their own built-in audiences to spread the box office wealth. Maybe it’s wrong to suspect that Ratner poisoned the franchise with his movie that there was less confidence in a new X-Men movie, but we’re just putting it out there.

Ratner is being a baby. There. We said it.