The Total Recall Remake Gets a Teaser Trailer, Reminds Us It Exists 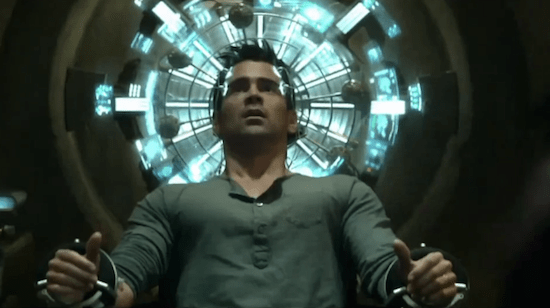 So, they’re making another Total Recall movie. Sounds like total crap, right? Just another poorly thought-out attempt by Hollywood studios to cash in on our collective nostalgia for the original 1990 Arnold Schwarzenegger Marsfest. Except this one is apparently set in a Blade Runner-esque Earth city, and has a bunch of flying cars like in The Fifth Element, some Stormtroopers that look like they wandered out of Clone Wars, and — oh crap, this is starting to actually sound kind of cool.

The full trailer will be released on April 1st (probably not a good choice if they want to be taken seriously) and broadcast on ABC during the Celtics/Heat game.

While it’s really easy to pan something like this before it even has the chance to run its trailer, I’m cautiously optimistic. As much as I enjoy the camp and the complexity of the original Total Recall, there’s always room for more riffs on the work of the legendary Philip K. Dick who wrote the short story that inspired both this film and the Schwarzenegger film. Let’s just hope that this latest effort manages to be its own movie, and not just an amalgamation of familiar tropes. Or just a series of explosions and freefalls, as the teaser seems to imply.

Total Recall is an action thriller about reality and memory, inspired anew by the famous short story “We Can Remember It For You Wholesale” by Philip K. Dick. Welcome to Rekall, the company that can turn your dreams into real memories. For a factory worker named Douglas Quaid (Colin Farrell), even though he’s got a beautiful wife (Kate Beckinsale) whom he loves, the mind-trip sounds like the perfect vacation from his frustrating life – real memories of life as a super-spy might be just what he needs. But when the procedure goes horribly wrong, Quaid becomes a hunted man. Finding himself on the run from the police – controlled by Chancellor Cohaagen (Bryan Cranston) – there is no one Quaid can trust, except possibly a rebel fighter (Jessica Biel) working for the head of the underground resistance (Bill Nighy). The line between fantasy and reality gets blurred and the fate of his world hangs in the balance as Quaid discovers his true identity, his true love, and his true fate. The film is directed by Len Wiseman. The screenplay is by Kurt Wimmer and Mark Bomback and the screen story is by Ronald Shusett & Dan O’Bannon and Jon Povill. The producers are Neal H. Moritz and Toby Jaffe.