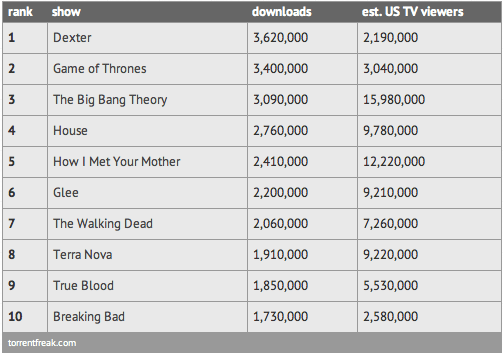 In this lull in the debate over SOPA, TorrentFreak has released their list of the top 1o pirated TV shows for 2011. HBO’s Game of Thrones had a strong showing with 3.4 million downloads, a full 360,000 more than the estimated US viewership for the series. However, it was blood-splattered Dexter that took the top spot with 3,620,000 downloads — a full 1.4 million more downloads than estimated viewers.

Shows like Dexter, Game of Thrones, and The Walking Dead are obvious targets for torrenting by virtue of running on premium cable networks. What is, perhaps, far more interesting is how shows like Glee, House, and How I Met Your Mother took such strong positions on the list. These are programs which run on major networks and are available ostensibly for free to anyone with a television.

While the numbers are somewhat staggering, TorrentFreak notes that these figures are actually down from previous years.

The percentage of TV-show downloaders, from the US in particular, has steadily declined in recent years. This is in part thanks to alternative viewing options such as Hulu and Netflix. In other regions, such as Australia and Europe, the demand for US TV-shows remains strong.

Availability is certainly a piece of what drives torrenters, but these figures also speak to a desire to have programs delivered in a timely, easy-to-use format. This is likely to be especially true for audiences outside the US. While these numbers will assuredly fuel the backlash against Internet piracy, it’s also an interesting snap-shot of the changing face of media in the digital age.