Louis C.K. Sends A Thank You To Fans Who Purchased His Special 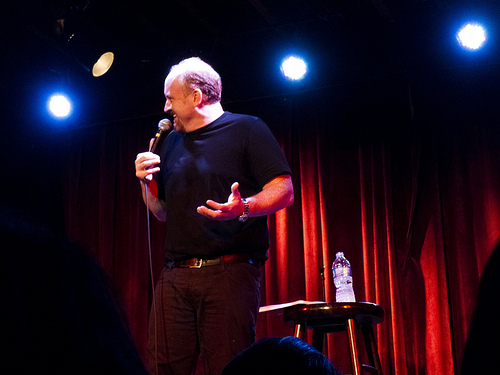 Comedian Louis C.K. made a bold move by releasing his “Live at the Beacon” special in an exceedingly open format. He trusted that his fans would want to support him. They did, and now he’s thanked them. Louis recently sent out an email to all those who didn’t opt out of further contact and thanked them for their purchases explaining that he used their $5 to buy “3 cokes.” Could a relationship between a creator and consumers be any more earnest, genuine, and amicable? I don’t think it’s possible.

It’s something to think about in these times where big companies are clamoring to have things removed from YouTube at the drop of a hat and SOPA is barreling towards passage. Louis C.K. took his latest special, on which he staked a sizable portion of his livelihood, and served it up to consumers directly and in an extremely pirate-able format. And he made good on the experiment because his fans like him because he is not a douche. Would ya look at that. Maybe the world is simpler than I thought.

Full text of the letter below, in case you didn’t get it after buying the special like you should have.

Hi. This is LOuie. It seriously is me. Im even going to leave the O stuipdly capatalized because who would pay an intern to do that?? Okay so you bought the thing with my fat face on it and you clicked the button that said i could email you. And i know that now you are thinking “aw shit. Why’d i let this guy into my life this way?”. Well dont worry. Because i really swear it that i wont bug you. I will not abuse this privalage of having your email. You wont hear from me again… Probably, unless i have something new to offer you. The reason i’m writing now, in the back of a car taking me to the Tonight Show set, is to let you know that as of now there is some new and cool stuff on my site, related to Live at the Beacon Theater. Theres a thing where you can download and print a dvd box cover and label so you can burn and make your own dvd of the video. And theres a new option where you can gift the special to as many people as you want (for 5 bucks each) and they’ll get a nice gifty email from you with a link to the video.

Also, some of you may know, i recently made a statement (that sounds so dumb. Like i’m the president or something) about how the video has been doing online. Im pasting it in here below in case you missed it.

Lastly I’m planning to put some more outtakes of the show on youtube and i think i will put one on the site that is only available for free to you folks on this list, who bought the thing and opted in. But dont hold me to that because really i just thought of it and typed it.

Okay well please have a happy rest of the year and more happy years after that. And please even have been happy in your past. What?

Thanks again for giving me 5 dollars. I bought 3 cokes with it.

=========================== People of Earth (minus the ones who don’t give a shit about this): it’s been amazing to conduct this experiment with you. The experiment was: if I put out a brand new standup special at a drastically low price ($5) and make it as easy as possible to buy, download and enjoy, free of any restrictions, will everyone just go and steal it? Will they pay for it? And how much money can be made by an individual in this manner?

It’s been 4 days. A lot of people are asking me how it’s going. I’ve been hesitant to share the actual figures, because there’s power in exclusive ownership of information. What I didn’t expect when I started this was that people would not only take part in this experiment, they would be invested in it and it would be important to them. It’s been amazing to see people in large numbers advocating this idea. So I think it’s only fair that you get to know the results. Also, it’s just really cool and fun and I’m dying to tell everybody. I told my Mom, I told three friends, and that wasn’t nearly enough. So here it is.

First of all, this was a premium video production, shot with six cameras over two performances at the Beacon Theater, which is a high-priced elite Manhattan venue. I directed this video myself and the production of the video cost around $170,000. (This was largely paid for by the tickets bought by the audiences at both shows). The material in the video was developed over months on the road and has never been seen on my show (LOUIE) or on any other special. The risks were thus: every new generation of material I create is my income, it’s like a farmer’s annual crop. The time and effort on my part was far more than if I’d done it with a big company. If I’d done it with a big company, I would have a guarantee of a sizable fee, as opposed to this way, where I’m actually investing my own money.

The development of the website, which needed to be a very robust, reliable and carefully constructed website, was around $32,000. We worked for a number of weeks poring over the site to make sure every detail would give buyers a simple, optimal and humane experience for buying the video. I edited the video around the clock for the weeks between the show and the launch.

The show went on sale at noon on Saturday, December 10th. 12 hours later, we had over 50,000 purchases and had earned $250,000, breaking even on the cost of production and website. As of Today, we’ve sold over 110,000 copies for a total of over $500,000. Minus some money for PayPal charges etc, I have a profit around $200,000 (after taxes $75.58). This is less than I would have been paid by a large company to simply perform the show and let them sell it to you, but they would have charged you about $20 for the video. They would have given you an encrypted and regionally restricted video of limited value, and they would have owned your private information for their own use. They would have withheld international availability indefinitely. This way, you only paid $5, you can use the video any way you want, and you can watch it in Dublin, whatever the city is in Belgium, or Dubai. I got paid nice, and I still own the video (as do you). You never have to join anything, and you never have to hear from us again.

I really hope people keep buying it a lot, so I can have shitloads of money, but at this point I think we can safely say that the experiment really worked. If anybody stole it, it wasn’t many of you. Pretty much everybody bought it. And so now we all get to know that about people and stuff. I’m really glad I put this out here this way and I’ll certainly do it again. If the trend continues with sales on this video, my goal is that i can reach the point where when I sell anything, be it videos, CDs or tickets to my tours, I’ll do it here and I’ll continue to follow the model of keeping my price as far down as possible, not overmarketing to you, keeping as few people between you and me as possible in the transaction. (Of course i reserve the right to go back on all of this and sign a massive deal with a company that pays me fat coin and charges you straight up the ass.). (This is you: yes Louie. And we’ll all enjoy torrenting that content. You fat sweaty dolt).

I also got an education. And everything i learned are things i was happy to learn. I learned that people are interested in what happens and shit (i didn’t go to college)

I learned that money can be a lot of things. It can be something that is hoarded, fought over, protected, stolen and withheld. Or it can be like an energy, fueled by the desire, will, creative interest, need to laugh, of large groups of people. And it can be shuffled and pushed around and pooled together to fuel a common interest, jokes about garbage, penises and parenthood.

I want to thank Blair Breard who produced this video and produces my series LOUIE, and I want to thank Caspar and Giles at Version Industries, who created the website.

I hope with all of my heart that I stay funny. Otherwise this all goes to hell. Please have a safe and happy holiday, and thank you again for all this crazy shit.