Pacific Islands of Tokelau First Territory To Be 100% Solar Powered 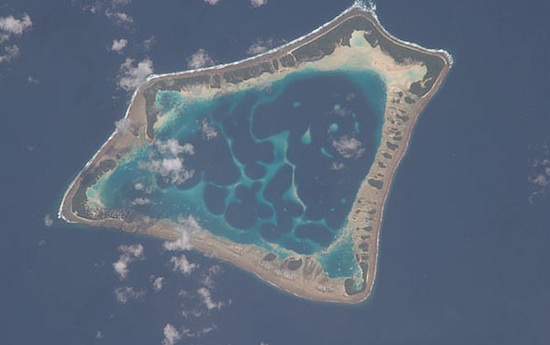 The island territory of Tokelau consists of just three small islands, including Atafu Atoll, above, which looks really pretty from the International Space Station, and has just 1,500 residents, so you can be forgiven for not knowing that it…is a thing that exists. This little group of islands has taken in a big step, though, becoming the first territory in the world to draw 100% of its energy from solar power.

Until now, Tokelau has been largely powered by diesel generators that cost the small island nation about $825,000 to operate annually. Now, paying for power is a thing of the past, as the three atolls have completed a solar grid that can power the entire territory all year round. In the long term that should not only save administrators money, it also promises to provide more reliable access to power to Tokelau residents. It also keeps thousands of gallons of diesel fuel from being burned up into the atmosphere every year. That’s a drop in the bucket so far as worldwide carbon emissions are concerned but hey — every little bit helps. Especially when you’re setting an example this dramatic.

It wasn’t easy for Tokelau to wean itself off of the generators that once supplied its electricity, and it’s going to be way harder for larger nations, like the United States for example, to ramp up solar power and develop infrastructure that supports it. We’ve got to start somewhere, though, and Tokelau shows that it can be done.

So come on, America — you’re not going to let yourself get shown up by a little island state, are you? That’s just embarrassing.