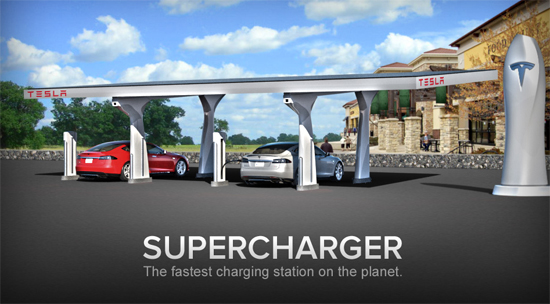 Tesla Motors has apparently taken to heart the idea that they should go big or go home. The company behind the Model S electric car has announced their ambitious Supercharger network, which will allow their cars to charge at ludicrous speeds compared to other electric offerings. There are currently only six stations, all of which are in California, but Tesla is already planning on expanding across the continental United States. The kicker? Model S owners will get to charge free at any Supercharger station.

The whole thing only works due to technology from SolarCity, a company also owned by Tesla CEO Elon Musk, that allows the Supercharger stations to produce enough solar power that they’re actually a positive influence on the power grid. Without it, Tesla probably wouldn’t be so keen on offering Model S owners free charging. Doing so, however, allows them to further incentivize the purchase of their cars.

The stations provide nearly 100 kilowatts of power, and in just a half hour can charge a Model S to the point where it can drive three hours at 60. To top it off, they’ll be intentionally building these stations near places folks would typically want to stop so as to ensure there’s something to do or see if owners want to just leave their car charging. Basically, they’re trying to provide the same amenities of a popular rest stop without having to actually build a rest stop.

Tesla’s plans to eventually cover the United States, and move to Europe and Asia, currently sound much like a pipe dream. The market for the Model S is still rather niche, as electric cars have yet to really take off in the general public, so already having plans this large in scope might be overreaching just a bit. If they’re going to build an electric car, though, it’s good to see them support it so heartily.