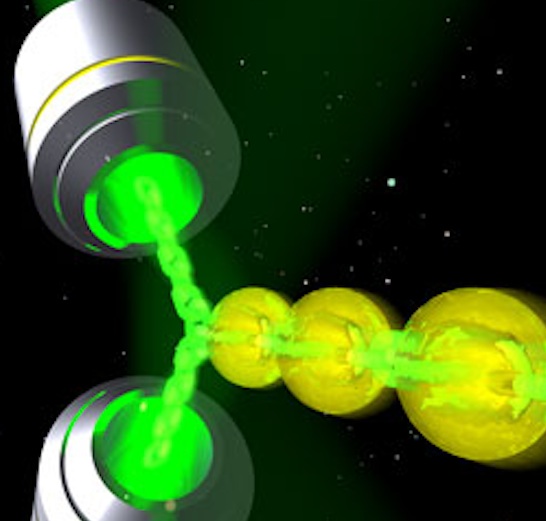 Researchers from Scotland and Ireland are reporting that they’ve developed a tractor beam that can manipulate light to move tiny particles back and forth at a microscopic level. The work is in it earliest stages right now, but considering it’s just the latest riff on tractor beam technology we’ve seen, it’s beginning to look more and more likely that seeing working tractor beams that can influence larger objects — that pencil that fell behind the desk, cargo on a freightliner, a Galaxy class starship — isn’t a matter of if, but when.

Usually, when you bounce beams of light off of a piece of matter, the matter is moved back a tiny bit — not enough that you’d notice, because hey, it’s just being hit by photons, but nonetheless, movement is movement. The beam, which was described this week in the journal Nature Photonics, exploits a sort of sweet spot in certain optical fields where light can be manipulated to reverse that movement, maneuvering particles towards the light source or from side to side. Depending on the objects being moved, researchers found that some of the objects they moved arranged themselves in a sort of chain when the beam acted on them, which served to make the beams pull even stronger and more effective.

The research, led by scientists from the University of St. Andrews and the Institute for Scientific Instruments, uses beams of light, rather than the concentric so-called “Bessel beams” that have figured into other models. Another difference is that rather than a device to scale up dramatically, the team behind this beam sees it as something that could remain small, one day becoming a tool for medical laboratories where it could be used for medical testing, including analysis of blood samples.