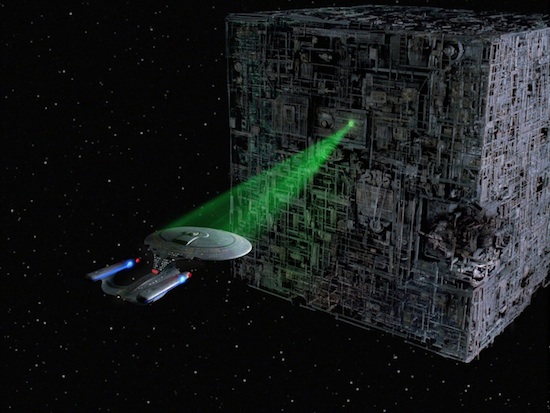 You guys, hold the phone. Drop whatever you’re doing right now. Is it dropped? Yes? Good. We have tractor beams now! Like where you zap a thing with a laser and pull it toward you with beam power? Yeah, those! We have those now. Even though they are super tiny and effective only on microscopic items like silica spheres suspended in water for right now, they are still working tractor beams, and now that we have the principle down, they are pretty much only going to get cooler from here. If you can’t get excited about that, I don’t even know what to say, as I have to assume you are already dead inside.

The new tractor beam design uses a special type of laser known as Bessel beams. Rather than a single beam, Bessel beams are transmitted as concentric circles that converge around the point they’re directed at. This gives the beams a unique quality. If you place a small object between the source of the beam and its destination, the concentric rings of the Bessel beam can reform around the object. That makes it possible for Bessel beams to pull or push objects — a quality of the beams that had been hypothetical until now.

After working with single Bessel beams to try and perfect a tractor beam and failing, New York University physicists David Ruffner and David Grier assembled a device that overlaps two Bessel beams. That overlap, combined with a slight distortion of the beams from a specialized lens, creates a strobing effect in the beams, producing enough energy to pull tiny grains of silica back toward the source of the beams.

The researchers’ work may not be right for tractor beams of the future, which will be used to assemble our space stations and hold extraterrestrial ships in place so we can board and raid them. Scaling up the current design would mean using a ton of energy, and probably destroying whatever objects you were attempting to manipulate with the beam. It opens the door to a really sweet new technology pulled right from the screens of science fiction, though, and most days, that’s good enough for us.