Time’s Up, Celebrities Call Out Golden Globes for Having Zero Black Members

"Hollywood Foreign Press Association: Not a single Black member out of 87. #TimesUpGlobes" 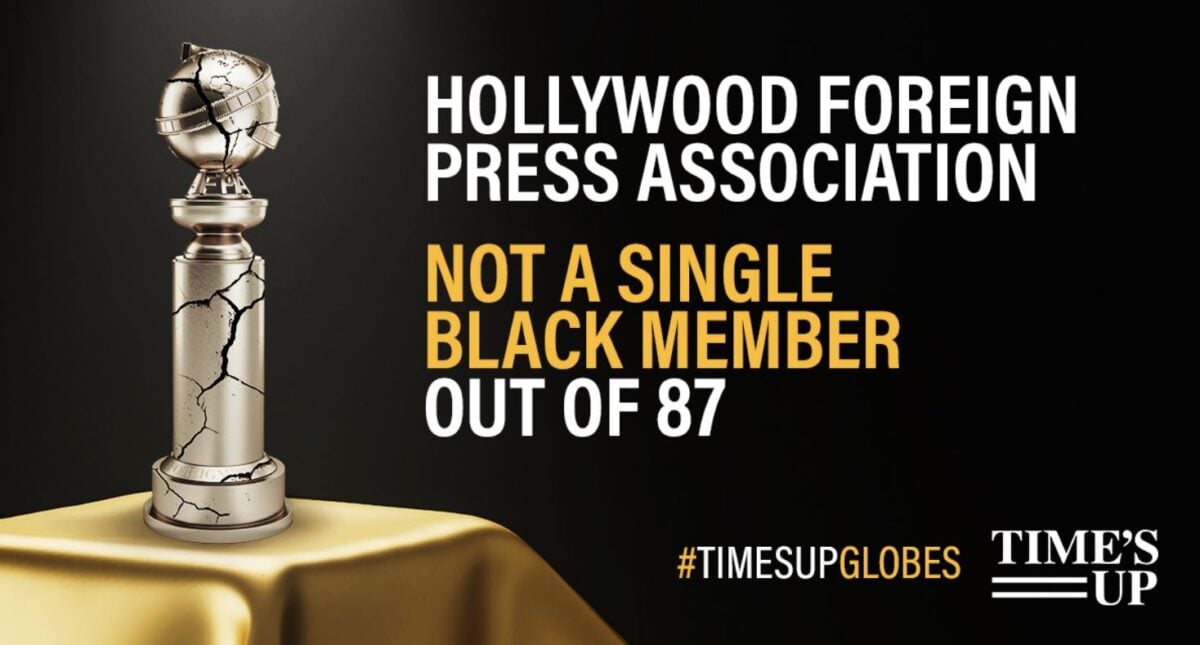 The 78th annual Golden Globe Awards airs tonight, but a long-simmering controversy has recently come to a head for its organizers, the Hollywood Foreign Press Association (HFPA). Long criticized for its lack of diversity, the HFPA, an organization of 87 LA-based journalists for foreign media outlets, has come under fire for having zero Black journalists in their ranks. And this lack of diversity has resulted in the exclusion of Black nominees in the high profile awards show.

This year’s snubs were especially egregious, as shows like Emily in Paris garnered nominations over groundbreaking series like Michaela Coel’s I Will Destroy You. In fact, Emily in Paris writer Deborah Copaken even penned an op-ed in The Guardian, where she stated, “That I May Destroy You did not get one Golden Globe nod is not only wrong, it’s what is wrong with everything.” In addition, the HFPA snubbed several films with mostly Black casts from their Best Picture categories, including Da 5 Bloods, Judas and the Black Messiah, Ma Rainey’s Black Bottom, and The United States vs. Billie Holiday.

A damning exposé by the LA Times revealed the lack of diversity in the HFPA, as well as questionable ethics, such as the 30 members who Netflix flew to Paris and gave first class treatment, all in an effort to buy nominations for Emily in Paris.

In response, Time’s Up has launched a digital campaign with the hashtag #TimesUpGlobes, calling attention to the lack of diversity within the HFPA’s ranks. The campaign features an image of a cracked Golden Globe and the message, “Hollywood Foreign Press Association. Not a single Black member out of 87. A cosmetic fix isn’t enough.” The campaign has earned the support of several prominent A-list celebrities, including Ava DuVernay, Judd Apatow, Shonda Rhimes, and others. The Directors Guild of America posted on Facebook, “When whole cultures are shut out of the conversation, their art and their voices are shut out as well.”

So many crazy things about the @goldenglobes and the Hollywood Foreign press but this is awful. #timesupglobes pic.twitter.com/C5PYs5zFRr

I support and congratulate all the nominees, but the HFPA needs to change in meaningful ways. Cosmetic fixes are not enough. #TimesUpGlobes

Flagrant and unacceptable. It’s a wrap on all of this. Deeply transparent omissions to the incredible work on display this season. And many, many seasons past. Enough of this. #TimesUpGlobes @TIMESUPNOW pic.twitter.com/53KOIy51ej

In response, the HFPA released a statement saying, “We are fully committed to ensuring our membership is reflective of the communities around the world who love film, TV and the artists inspiring and educating them. We understand that we need to bring in Black members, as well as members from other underrepresented backgrounds, and we will immediately work to implement an action plan to achieve these goals as soon as possible.” The HFPA added that it will address the controversy in tonight’s broadcast.

(via The Hollywood Reporter, featured image: screencap/Time’s Up)