TIL the human brain automatically replaces "outage" with "outrage" when it's next to "Time Warner Cable." 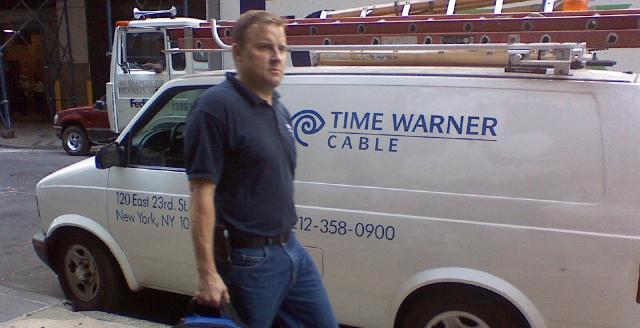 Time Warner Cable narrowly avoided bringing on the wifipocalypse this morning when Internet service to their customers went down nationwide. Somehow, the people managed to band together in the dark and make do for a few hours without the Internet, but they’re not happy about it.

The outage was reportedly caused because someone’s hand slipped and hit the “turn off the Internet” button (or something more technical that we don’t know about yet) during routine maintenance on the company’s “Internet backbone.” Service went down around 4:30AM ET and was largely restored by 6:30AM, with TWC saying, “Services were largely restored as updates continue to bring all customers back online.” I guess they finally tried turning it off and then back on again.

Whether it was just a maintenance error or some new customer service program to help cut down on those ill-advised, late night eBay purchases (you know the ones), there were apparently enough people still trying to use the Internet at that time that some #TimeWarnerCable quickly began trending on Twitter.

A lot of people are taking this as another indication of the horrors we could face if TWC’s merge with Comcast makes it through anti-trust concerns.

If a monopoly on Internet service leads to service going down more often, you won’t hear about it. Or about anything else. #timewarnercable

Hey look what happens when you give Internet companies mini-monopolies and then they go down. #TWC #timewarnercable

About that Concast-#timewarnercable merger: nationwide outage, no explanation? That’s the signature of an indifferent monopoly.

Here’s a view of where many of TWC’s 11.4 million subscribers were left without service:

A bit of advice about how to express your feelings to Time Warner:

#timewarnercable #timewarner Want to prevent another Time Warner “outage”? You have to call them and ask to be reimbursed for the down time! And some good old fashioned sarcasm: — #VMA2014 (@meetmagazine) August 27, 2014

Trivia Fact! If you see #timewarnercable trending, that means you’re one of the lucky ones — TrivWorks (@TrivWorks) August 27, 2014

This is how Planet of the Apes starts. #timewarnercable

Have you tried unplugging the internet and plugging it back in? #twc #timewarnercable

This outage came at a pretty inconvenient time considering the existing feelings about the planned Comcast merger, but hey, don’t feel too bad, Time Warner. At least this new customer outrage can’t put you any lower than your last place ISP customer satisfaction rating with the American Customer Satisfaction Index. Silver lining!

(via LA Times, image via Consumerist)

Previously in the Internet