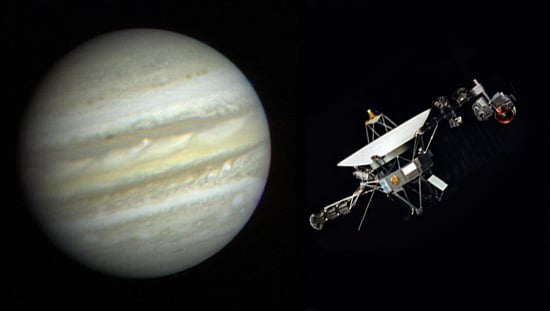 As a race, we can’t leave well enough alone. We need to look and prod and just generally be voyeurs of the entire universe, and that’s been all right, since aliens haven’t called us on it yet. So back in 1977, we sent out a space probe — not the first, not the last — that you might remember called Voyager 1. Its mission was to get a good look at the outer reaches of the Solar System. And so it was that today, in 1979, Voyager 1 made its closest approach to mighty Jupiter and snapped some amazing photos. Thousands, in fact. So what did we learn about the Jovian gas giant that constitutes the fifth planet from the Sun?

For one, we got a closer look than we’d ever had before. Voyager 1, and its twin, Voyager 2, which arrived a couple of months later, gleaned new geological, physical, and atmospheric data not only from the planet itself but from its magnetosphere and some of its satellites (Jupiter has 67 moons, but 4 are particularly big). For example, we saw active volcanoes on Io, Jupiter’s largest moon and that those volcanoes were spewing matter throughout the Jovian system. That’s one volatile little moon — and by little I  mean 2,263 miles in diameter — causing quite a ruckus.

Also, until then, we’d never seen active volcanoes anywhere else before, except Earth. Go Io! Its sulfur, oxygen, and sodium were found flying around at the outer edge of the aforementioned magnetosphere of Jupiter. It’s a bad-ass moon, to be sure, making ours look like the couch potato of planetary satellites.

Have a look at this. This is one of the remarkable time-lapse videos that Voyager 1 recorded during its approach to Jupiter. Just look at that roiling, scary mass and its unblinking eye….

Voyager 1 went on to further glory, spying on Saturn, and continued on its merry way. (Voyager 2 got more done with Neptune and Uranus, but that’s another story for another day)

So whatever happened to our little ’77 space probe? It’s still out there! As of this post, Voyager 1 is more than 18 billion kilometers from Earth, heading inexorably towards interstellar space, and it’s still equipped (like its twin) with one of those cool, gold-plated, listen-to-what-we-sound-like-and-check-out-our-music LPs intended for the aliens who eventually find it and levy their judgement on us.

We hope they’ll be forgiving. Mostly the Voyager Golden Record contains snippets of Earth language, whale sounds, and babies crying, not to mention some classical music and some old school rock ‘n roll — sadly, not Rush’s “2112,” which I’d have voted for if I’d worked for NASA back then. But at least there’s no Bieber. I think we needn’t worry too much about alien invasion. 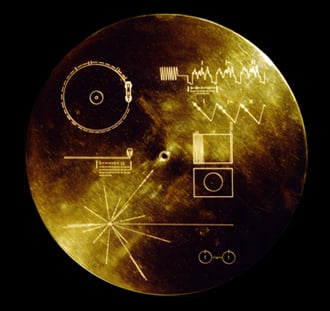 (via NASA, images courtesy of NASA and Wikipedia)