Scientists Say Europa, Not Mars, Is Best Place To Search For Life 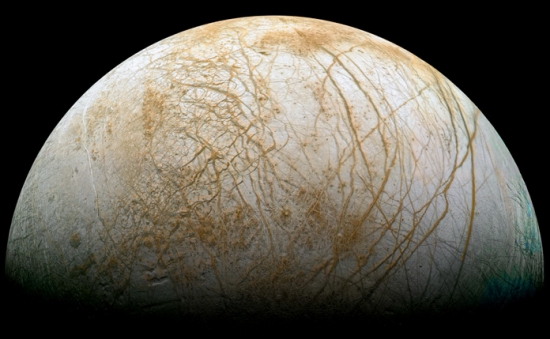 Searching for life on Mars is all the rage right now. We’ve covered the Curiosity rover mission quite a bit here at Geekosystem, because NASA shot a robot at a planet, landed it safely on the surface, and now that robot is drilling and sending back data. That’s amazing. As amazing at it is, though, some scientists think we should be using our resources to look for life in a more likely spot — Jupiter’s moon Europa.

The Curiosity mission was a great success for NASA, and at a time when the government is looking to make severe cuts to programs like NASA, they really needed a win. It got people talking about space — and Bobak Ferdowsi’s mohawk — with renewed interest. The mission was so successful NASA announced another one just like it. They’ll be sending a rover similar to Curiosity to Mars in 2020. That project will cost $2.5 billion, but some scientists think that money could be better spent in the search for life in the solar system.

Robert Pappalardo from NASA’s Jet Propulsion Laboratory said, “Europa is the most likely place in our solar system beyond Earth to possess …. life. And it is the place we should be exploring now that we have a concept mission we think is the right one to get there for an affordable cost.”

The “concept mission” he’s referring to is named Clipper, and it was developed by the JPL and the Applied Physics Laboratory at Johns Hopkins University. Clipper wouldn’t sent a rover to the surface of Europa, but it would launch a probe that orbits Jupiter and makes numerous flybys of  moon, studying it as it passes.

“Europa is the most promising in terms of habitability because of its relatively thin ice shelf and an ocean … And we know there are oxidants on the surface of Europa,” said Pappalardo, who also claimed the Clipper mission would cost $2 billion, not including the launch itself.

Although evidence shows that life may have existed on Mars in the past, the chances of there currently being life on the planet are slim. Conditions on Europa are such that they could be currently supporting life, says Pappalardo. Although NASA is not funding the Clipper mission, they could participate in the European Space Agency’s “Jupiter Icy Moon Explorer” which plans to send a spacecraft to Europa by 2030.

If NASA wants to gain more funding, they need to get the public, and the government, interested in space again. It seems like the best way to do that is to find life, and if life is more likely to be found on Europa, then why are we sending another rover to Mars?

(via Phys Org, image via NASA)