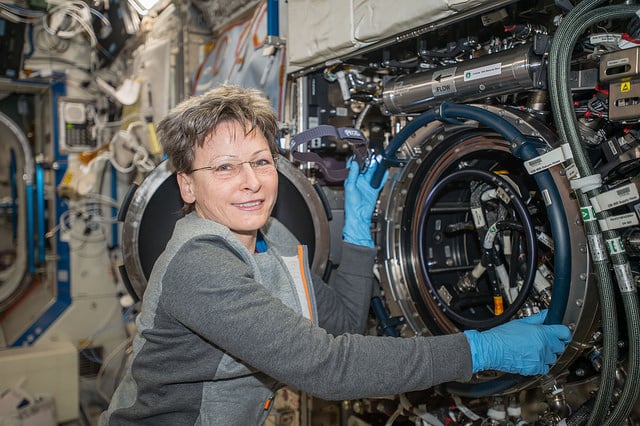 Astronaut and biochemist Peggy Whitson is returning to Earth today, after a 288-day stint at the International Space Station (ISS). This brings her career total to 665 days in space, making her the American astronaut with the most experience in orbit. (For the world record, she lands in eighth behind seven Russian cosmonauts.) She also set the record for oldest female NASA astronaut back in November of 2016.

NASA Television will air the return of Whitson, as well as her Expedition 52 crewmates Jack Fischer (NASA) and Commander Fyodor Yurchikhin (Roscosmos/Russia). The deorbit burn will air at 8:29 P.M. EDT, and the landing at 9:22 P.M. EDT. NASA will then replay the whole process – hatch closure, undocking, and landing activities – at 11:00 P.M. EDT.

Asked what she will miss from her time in space, Whitson said to NASA, “I will miss seeing the enchantingly peaceful limb of our Earth from this vantage point. Until the end of my days, my eyes will search the horizon to see that curve. I will miss seeing and working within this awe-inspiring creation that we, as a people, have constructed here in space, travelling at 17,500 mph.”

While few of us can understand Whitson’s accomplishment and experience in space, there’s one part of her return we can all understand. When asked what she was most looking forward to about Earth, she said, “Pizza has been on my mind for a month or two.” (via Ars Technica and NASA)