Things We Saw Today: A 2-Year-Old Girl Chose a Doll at the Store and It’s Now International News 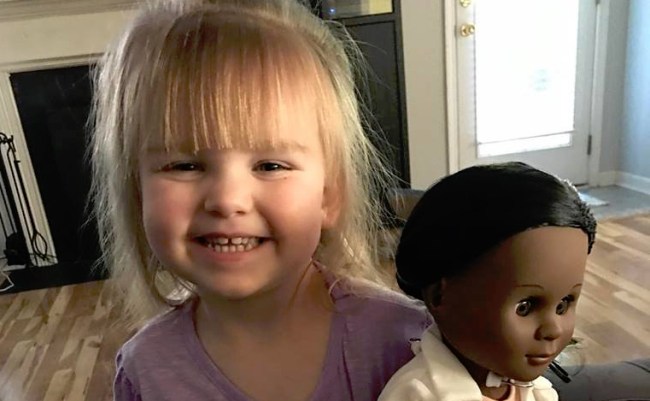 Today in heartwarming viral media, a South Carolinian 2-year-old named Sophia was allowed to select the doll of her choice at Target. She chose a black doll and was questioned about the choice by the cashier, who asked if she wouldn’t prefer a doll that looked like her, according to Sophia’s mother. Sophia proudly stuck by her selection, and this is now a story covered by dozens of outlets around the world.

The tale of Sophia and her doll has all the hallmarks of what makes a story go viral. It features an adorable child, points to the children as our better future, thumbs its nose at out-of-touch and out-of-date social mores, and is generally something happy to applaud while the rest of the news concerns the dumpster fire Trump Administration and horrific gassing deaths in Syria.

I guess I’m just a little thrown by the breathless, wall-to-wall coverage of this event. Sophia’s mom’s Facebook post has been “Liked” 520k times and shared more than 200,000 times. Type in “girl 2 doll” on Google News and you’ll get an endless scroll of articles. I’m glad that Sophia chose her doll without prejudice and it’s cool to see her story resonate with so many—but part of me just keeps thinking: Really?

In 2017, is it front-page news that a white girl should want a black doll? Is the shocking part the cashier’s inappropriate questioning, which doesn’t shock anyone living in Trump’s America? “She picked the doll out herself,” specifies Metro’s photo caption, as though this were a thing hard to believe. And while dolls have certainly diversified in their appearance, what about all the little girls and boys who still can’t find one that looks like them in the first place?

Am I just too jaded that I’ve lost the ability to understand why this has dominated world headlines? So many questions. 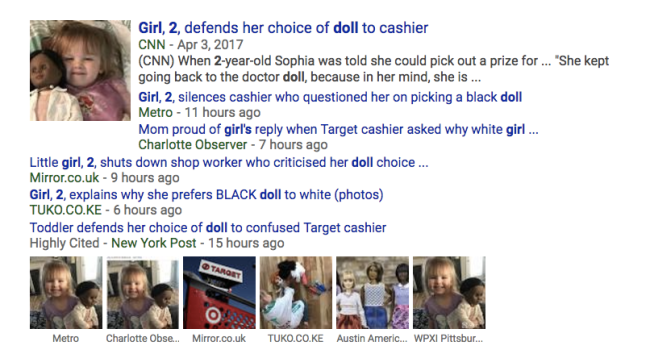 No more news for me today, I think. What’d you dig up, friends?