Things We Saw Today: Porgs Are Star Wars’ Adorable New Creature and They Are Here to Ruin Your Life 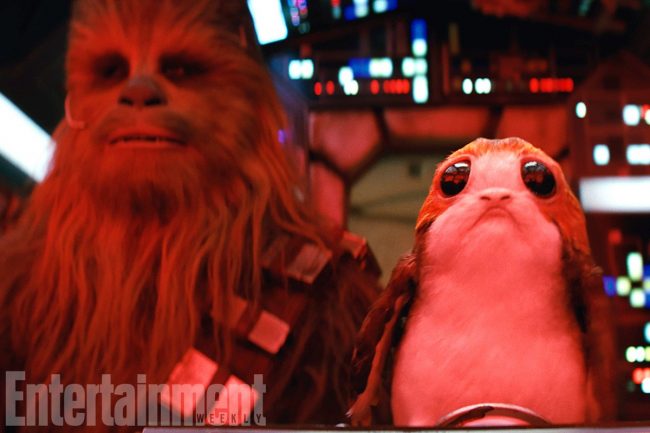 Listen, I know creatures designed to elicit “Aww!“s can end up pissing off a good portion of Star Wars-watchers, but check out this Porg from The Last Jedi and tell me you don’t want to cuddle the hell out of it:

BB-8 still has a special place in my heart but LOOK AT THIS PORG IT’S SO FREAKING CUTE #StarWars #TheLastJedi https://t.co/z2YV2Oauhg pic.twitter.com/7iWAAYDYM2

Director Rian Johnson was inspired to create the Porgs, who are native to the planet Ahch-To (where Rey will with Luke), after seeing the puffins that clustered around the movie’s shoots in Ireland. And there’s already Porg-shaped drama on the horizon, per TIME: “Lest you think the new creature is filling the Han Solo-shaped hole in Chewie’s heart, EW reports that while Porgs are cute and cuddly, they are ‘vexing to Wookies.'” Chewbacca is not happy, but I need a stuffed Porg, like, yesterday. Of course, our Porg-related fears are not entirely unfounded:

“What if they use it like Jar Jar Binks?” pic.twitter.com/Y6N2jHaoJX

Who would win in a fight between a groundhog and a Porg? Or would they be best friends?