A wonderful joke seems to have been played on the Internet at large, but we are left wanting and dreaming of what could have been.

While some outlets were skeptical about the unannounced movie’s sudden appearance, it had an elaborate official site full of production photos, an IMDB page, a hashtag (#dundeemovie), and a real article in People that quoted original Crocodile Dundee star Paul Hogan confirming his involvement. It got a lot of write-ups as the real thing.

Crocodile Dundee is back. Well, actually, he’s missing in the Outback. And the only person who might be able to find him is the loudmouthed American son no one knew he had.

I mean, this is the Era of the Reboot, and this American-fish-out-of-the-Outback idea would hardly have been a stretch for a Hollywood comedy. All of the teasing for Dundee was so well done that we wanted to believe. 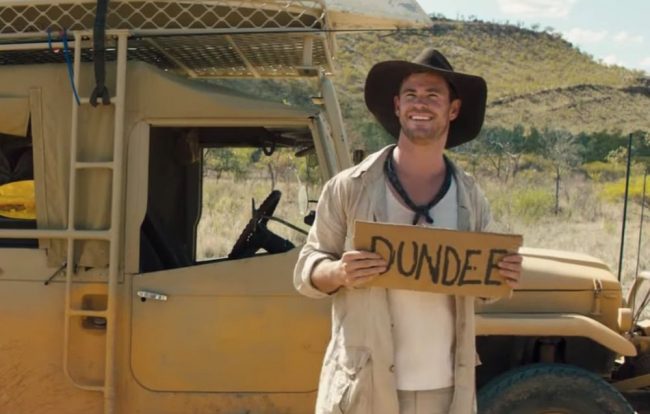 Alas, as Slashfilm reports, The Brisbane Times dashed our hopes of getting to see Chris Hemsworth stab a crocodile in the head: the “movie” appears to be an elaborate and ingenious advertisement designed to induce us to visit Australia—Hemsworth is a Tourism Australia ambassador—but, hey, it worked! There was blanket media coverage and speculation about the teaser trailers, which featured stunning shots of Australia and stunning Australians. It’s hard to buy buzz like that. Someone deserves an award for this ad campaign.

Who knows—maybe the Internet’s excited reaction could one day make Dundee: The Son of a Legend Returns Home a reality. Stranger things have happened! As for me, I’m already looking for discount flights to Australia.

That’s it from us—did you fight off any crocodiles today?