Guys, this isn't what fixing the problem looks like. 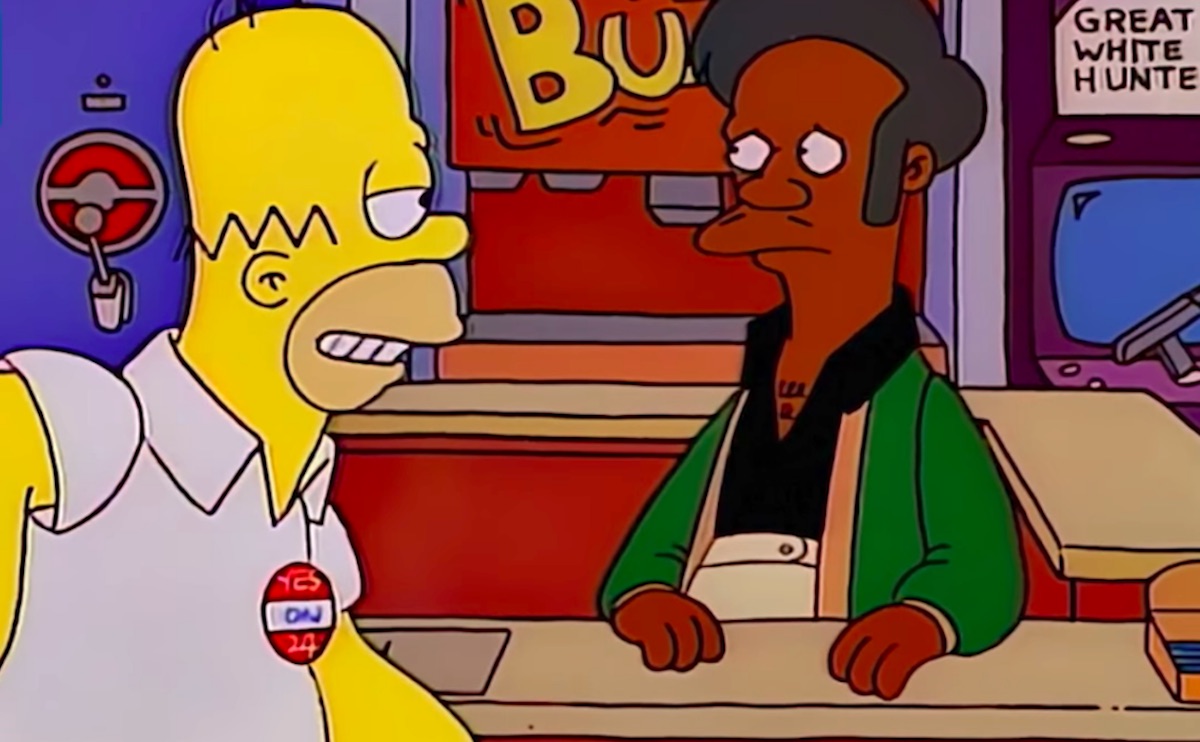 How do you solve a problem like Apu Nahasapeemapetilon? The question has been on everyone’s minds since Hari Kondabolu’s 2017 documentary The Problem With Apu came out, where the comedian interviews other South Asian actors and comics about the Kwik-E-Mart manager. In the film, Kondabolu tries to reconcile his love of The Simpsons with the problematic Apu, while discussing larger issues of representation and inclusion.

Now, it appears that The Simpsons is dealing with their Apu problem by quietly writing the character out of the series. The news came from producer Adi Shankar (Lone Survivor, Castlevania), who launched a contest in April for a spec script that would adequately address the problem. Shankar’s contest set out to find a script that, “in a clever way subverts [Apu], pivots him, writes him out, or evolves him in a way that takes a creation that was the byproduct of a predominately Harvard-educated white male writers’ room and transforms it into a fresh, funny and realistic portrayal of Indians in America.”

Shankar’s plan was to pitch the episode to FOX, and if they rejected it, to produce a fan-made version on his Bootleg Universe YouTube page. But now, Shankar has gotten word from multiple sources that the show is quietly removing the character from future episodes. “I got some disheartening news back, that I’ve verified from multiple sources now: They’re going to drop the Apu character altogether,” said Shankar. “They aren’t going to make a big deal out of it, or anything like that, but they’ll drop him altogether just to avoid the controversy.”

“If you are a show about cultural commentary and you are too afraid to comment on the culture, especially when it’s a component of the culture you had a hand in creating, then you are a show about cowardice. It’s not a step forward, or step backwards, it’s just a massive step sideways. After having read all these wonderful scripts, I feel like sidestepping this issue doesn’t solve it when the whole purpose of art, I would argue, is to bring us together.”

The Simpsons has made attempts to address the controversy in the wake of Kondabolu’s documentary, with diminishing returns. While voice actor Hank Azaria has said publicly that he’s willing to step away from the role, and called for more diversity in the writers room.

The Simpsons creator Matt Groening was less supportive, saying “I’m proud of what we do on the show. And I think it’s a time in our culture where people love to pretend they’re offended.”

The show addressed the issue in the episode “No Good Read Goes Unpunished”, where Marge and Lisa discuss a “politically correct” version of a novel called The Princess in the Garden, where the adaptation has ruined their enjoyment of the original novel.

The episode ends with Lisa looking directly to camera, saying “Something that started decades ago and was applauded and inoffensive, is now politically incorrect.” Lisa looks at a bedside photo of Apu that says ‘Don’t have a cow.’ and follows up by saying to the audience, “What can you do?” “Some things will be dealt with at a later date,” adds Marge. “If at all,” replies Lisa.

The episode was critically panned, and since then the show hasn’t returned to the issue. It’s disappointing for a show as savvy and self-aware as The Simpsons is (or was) to not be able to address the issue in a more nuanced and satisfying manner. Instead of doing the hard work necessary to reboot or revise the character and address their mistakes, writing Apu off feels like the easy way out.

Agreed. There are so many ways to make Apu work without getting rid of him. If true, this sucks. https://t.co/czBDIvaTV0