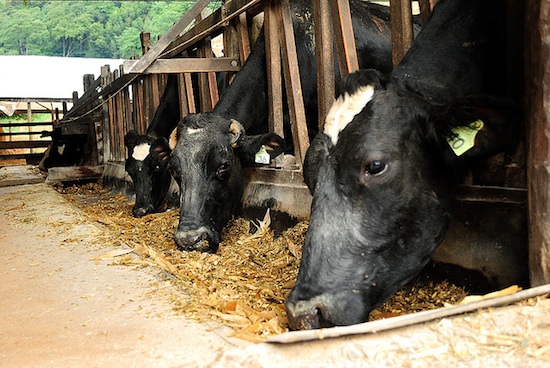 The summer’s record-setting drought is causing a spike in prices of commodities like corn, forcing farmers to get creative. When farmers get creative, lucky cows get sweet, sweet candy in their diets. Joseph Watson’s cows do, at least. Watson is the proud owner of 1,400 head of cattle in Mayfield, Kentucky who used to get corn in their diets. Now, they get delicious candy instead.

Corn didn’t make up very much of Watson’s cow feed, accounting for about 5% of the mixture by volume. It’s mostly there to help cows put on weight more rapidly. As plenty of us know, a diet heavy in candy will do that trick quite nicely as well. With corn prices rising and the cost of bulk remaindered candy about what you would expect for bulk, remaindered candy, Watson decided to make the switch.

Watson isn’t overly concerned about what sort of candy makes its way into the feedlot. From chocolate to gummy worms, he buys a variety of sweets directly from manufacturers — mostly disfigured or otherwise unacceptable candy that they couldn’t put on store shelves. Then, he mixes the candies with minerals and a by-product of the ethanol industry and mixes it in with the hay, grasses, and other foodstuffs that make up cow feed. Cows being generally less than picky eaters, they don’t seem to mind the addition, and Watson reports that his herd is putting on weight at a good pace on the unconventional diet.

Getting human junk food into cow feed isn’t a new idea. Kobe beef cows are famously fed on beer to raise their weight and make their meat more tender. Other cows get a couple bottles of wine everyday to flavor and tenderize their meat. Perhaps it was inevitable that we start raising cows on the some of the unhealthiest foods the planet has to offer, though it does make one think twice about grabbing that Snickers bar at 7-11. That stuff is now literally what they feed livestock to fatten them up. It’s not a great connotation.

On the other hand, this could also offer junk food lovers a brand new excuse for indulging their more deleterious dietary habits. Next time someone tries to give you flack for eating a whole pint of Ben & Jerry’s, just remember: You’re not overeating. You’re working on your marbling.